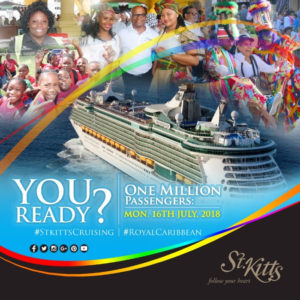 Basseterre, St. Kitts, July 14, 2018 (SKNIS): The Government of National Unity is no stranger to making history as just on the heels of the notable success of the St. Kitts Music Festival, the MS Freedom of the Seas will bring the one millionth passenger to the shores of the Federation on Monday, July 16.

“That millionth passenger will alight from the ship and be greeted by the friendly people in St. Kitts and Nevis,” said Minister of Tourism, Honourable Lindsay Grant, speaking at a sitting of National Assembly on July 13. “Mr. Speaker, it is particularly significant that this is taking place with still two months left in our cruise year because the cruise year runs from October to September. So, we are calculating this from October 2017 to September of 2018.”

Minister Grant noted that the cruise industry is highly competitive as there are 35 jurisdictions within the Florida-Caribbean Cruise Association (FCCA) region.

“I must say we are holding our own,” he said. “The last BREA Report, which is a report of the 35 jurisdictions under the FCCA placed us at about three of 35 jurisdictions and so we are grateful for that.”

The minister stated that reaching the millionth passenger mark was no small feat and puts the Federation in a different position.

“It now propels us to what we call marquee status,” he said. “A marque status is those jurisdictions which not only have one million and about passengers, but who satisfy the cruise industry with a particular level of efficiency, tours, etc.”

When the cruise liner docks at Port Zante at 8:00 a.m., the 4,375 passengers will be treated with melodious steel drum music and will experience the folklore of the island including the masquerades and moko jumbie.

The tourism minister is encouraging all citizens to share in the historic occasion. T-Shirts will also be given away.

Federico Gonzalez, who is the Associate Vice President of Government Relations for Latin America, the Caribbean and South Florida for Royal Caribbean Cruises Ltd., will be on island for the event.

“It is such a milestone that we are achieving on Monday that they are going to make sure that one of the top executives of Royal Caribbean comes to St. Kitts to witness this,” said Minister Grant.