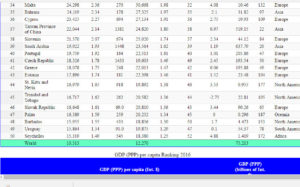 World Bank national accounts data, and OECD National Accounts data files are indicating that St.Kitts-Nevis’ in 2016 , recorded its highest ever GDP Per Capita rate . According to the World Bank Data St.Kitts-Nevis’ GDP (Nominal) per capita Rate for 2016 stands at US$ 16,979 which is the highest ever recorded by the federation.  The International Monetary Fund World Economic Outlook lists St.Kitts-Nevis at #44 in the World GDP per capita Rankings. The Bahamas is the only English-speaking Caribbean country ranked higher.  The ranking was a jump of 10 spots from their 2015 world rank of #54 in 2015. The Top 4 in the Caribbean Community or Caricom are:

“Over the last two years, we have ensured that the government of St. Kitts and Nevis pursues a fiscal policy that has resulted in surplus on the three principle accounts in the economic classification: the recurrent account, the overall account and the primary account,” Prime Minister Dr. Timothy Harris stated recently .