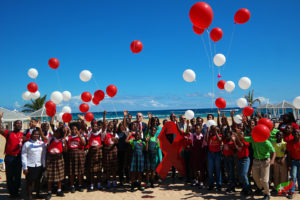 BASSETERRE, St. Kitts, December 2, 2017 (Press Unit in the Office of the Prime Minister) – The strides made in the Caribbean region in reducing the number of new cases of HIV, as well as the steps taken towards the elimination of Mother-to-Child Transmission (EMTCT) of HIV and syphilis were highlighted today during a high-level World AIDS Day Regional event at the St. Kitts Marriott Resort.

That meeting was organized by UNAIDS in collaboration with the Pan American Health Organization (PAHO) and the Pan Caribbean Partnership Against HIV/AIDS (PANCAP) and the Government of St. Kitts and Nevis.

An indication of the progress made in reducing new cases of HIV includes the validation by the World Health Organization (WHO) that St. Kitts and Nevis, as well as five other Caribbean islands, has successfully eliminated mother-to-child transmission of HIV and syphilis.

It was also reported that since the launch of the Regional Initiative for the Elimination of Mother-to-Child Transmission of HIV and Congenital Syphilis in Latin America and the Caribbean in 2010, new HIV infections have been reduced in the Caribbean by 55 percent among children, from 1,800 in 2010 to fewer than a thousand in 2016.

St. Kitts and Nevis’ Prime Minister, Dr. the Honourable Timothy Harris, said at present, there are just under 300 persons living with HIV/AIDS in the Federation.

Dr. Harris stated, “Their prospects are far different from what would have been, in a by-gone era when an HIV diagnosis meant certain death, or even during the period when HIV medicines were so expensive that only a few individuals had access to them.”

With respect to access to HIV treatment, Prime Minister Harris, who also serves as CARICOM’s Lead Head with Responsibility for Human Resources, Health and HIV, noted that the number of people on treatment in our region has more than doubled between 2000 and 2016.

“In fact, we crossed a boundary in 2016 when, for the first time, more than half of all people living with HIV in the Caribbean were accessing antiretroviral therapy. We are gathered together again on World AIDS Day 2017, not with fear or sorrow, but with confidence that we have the tools to end this epidemic.”

Furthermore, Dr. Harris said his Government is cognizant of the fact that greater emphasis on the prevention of HIV, as well as increased efforts in treatment is important in achieving the sustainable development goal to end AIDS by 2030.

“The Ministry of Health in St. Kitts and Nevis is committed to scaling up treatment to ensure that people living with HIV are able to stay healthy and alive,” the prime minister said. “The ministry also recognizes that we will not achieve the global targets by scaling up treatments alone. In this regard, more energies and efforts have been placed on HIV prevention, particularly in workplace settings and among the key populations with increasing availability of and uptake of condoms, testing and screenings.”

“Our challenge is to quicken the pace while ensuring that no one is left behind. We have a small window of opportunity remaining to close several gaps,” said Prime Minister Harris.