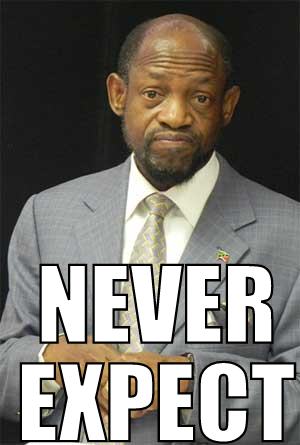 The often described maladjusted opposition in St.Kitts-Nevis continues to suffer from what at least one writer has labeled the NEVER EXPECT syndrome. The Dr. Denzil Douglas led opposition continues to show significant signs and characteristics of this. David in the Bible suffered from NEVER EXPECT. He NEVER EXPECT God to punish him for what he did to Bathsheba’s husband. Pharaoh NEVER EXPECT God to tell Moses to stretch forth his rod and close back the Red Sea and he and all his men drowned. All the things he had planned when he returned with them to Egypt was all he thought about. He forgot there was a God of Abraham, Isaac and Jacob. When the now Dr. Douglas led Labour/NRP Coalition opposition and then government spent unprecedented millions to maintain power Dr. Douglas NEVER EXPECT his coalition alliance could lose. NEVER EXPECT is hard to fathom and even harder to accept. Sleepless nights, senseless utterances and the inability to adjust are some of the charaterictics and clear signs of NEVER EXPECT. NEVER EXPECT results in the inability to accept responsibility for failures
The maladjusted opposition in St.Kitts-Nevis are a classic study in the NEVER EXPECT syndrome and they provide the perfect case study to highlight the negative impact that NEVER EXPECT can have on the sanity, credibility and longevity of political organizations, politicians and activists.
The Opposition’s failure to adjust due to the “NEVER EXPECT” conundrum that they find themselves in is resulting frequent and mostly senseless, inaccurate and hypocritical pronouncements and on air statements which further exposes their maladjustment . It seems it will take some time for the maladjusted opposition to get over their current situation as they NEVER EXPECTed such a thing to happen and to be in such a situation.
NEVER EXPECT speaks to a moral which basically dictates “Expect anything when people go to the polls. NEVER EXPECT that they will cast that “X” for you. Pray and hope they will because after the counting when you lose you too may suffer from NEVER EXPECT.