Sir Probyn Ellsworth Inniss has died. Sir Probyn was easily one of the most significant figures in the history of St.Kitts-Nevis . 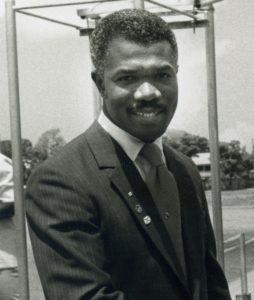 Associated State of the United Kingdom  at the tender age of 39. The youngest person ever to be named Governor. Sir Inniss served in that position until 1981. In connection with his appointment as Governor , he was created a Knight Bachelor in the 1976 New Year Honours and was personally invested by Queen Elizabeth II in July of the same year. During his term in office, there were three changes in government, with Sir Robert Bradshaw, Sir Paul Southwell, Lee Moore, and Dr Rt Hon and Rt Excellent Sir Kennedy Simmonds all serving as premier at various stages.

Sir Probyn’s distinguished life and career also included his contribution to the legal fraternity  as the Senior Partner in the Law Firm, Inniss and Inniss and his service in the Public Service as Permanent Secretary, Crown Counsel and Teacher.

After graduating from the University of the West Indies in 1961, he taught at the St. Kitts-Nevis Grammar School for some years. He later read Law at the Inns of Court School of Law in London and was called to the Bar at the Middle Temple.

Sir Probyn was also a much sort after historian and author having penned a number of books that looked at various aspects of the history of St.Kitts-Nevis. Some of his Titles includes “Historic Basseterre: The Story of a West Indian Town, Whither bound St. Kitts-Nevis?, Methodism in St. Kitts, 1787-2006. Forty years of stuggle. The birth of the St. Kitts Labour Movement,  all books available on Amazon.

The Nation of St.Kitts-Nevis is in deep mourning as an icon in its truest sense has passed.

1 Comment on St.Kitts-Nevis Has Lost a Giant! Sir Probyn Inniss is Dead