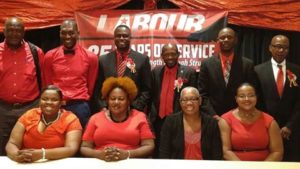 BASSETERRE, ST. KITTS, May 22nd 2017 – Despite drawing Less than 300 Delegates , far less than their customary 600 plus the St. Kitts-Nevis Labour Party (SKNLP)  Conference had an aura of optimism and hope . The exuberant group of delegates  at Sunday’s 85th Annual Conference were not discouraged by the relatively small turnout at the conference . The delegated enthusiastically re-affirmed their confidence in the leadership of the Rt. Hon. Dr. Denzil L. Douglas despite hours long and heated debates and exchanges in the Private Session of the annual delegates event.

The Conference which normally ends at around 7pm went well past midnight and saw Dr. Douglas, the former Prime Minister and current  Leader of the Opposition, re-elected unopposed to continue to serve as National Political Leader.

Roosevelt Trotman is the new face among the three Nominated Members. Re-elected were Thamesha Fyfield and Kenny Douglas.

In his address to the delegates, Dr. Douglas indicated that the SKNLP have overcome many obstacles . The SKN Labour Party according to most observers are experiencing what is being described as the party’s lowest political ebb in it’s 85 year history. The Party’s flagship event on the political calendar , the annual labour day march was the smallest in over 20 years . This was followed by a party organized anti-government protest march which drew less than 40 hardcore supporters to the streets of Basseterre.

It is unclear what the next step for the party will be . However it is being widely speculated that the Opposition Group will be engaged in a PARTY Retreat which is to be convened shortly with the view of deciding on a way forward for the party.