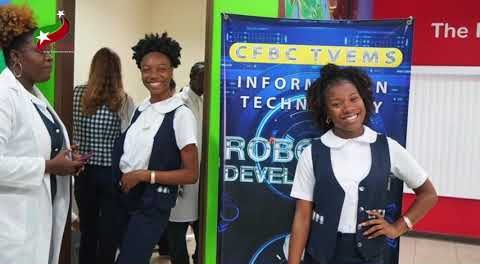 Basseterre, St. Kitts, October 29, 2018 (SKNIS): With the increased use of technology in everyday life, the Government of St. Kitts and Nevis continues to be a leader in deploying Information Communication and Technologies (ICTs) and enhancing efficiencies and citizen- centric services.

The 2017 ICT Development Index compiled by the International Telecommunications Union (ITU), ranked St. Kitts and Nevis 37 out of 176 countries.

Attorney General, the Honourable Vincent Byron, Minister with responsibility for Communications, said this while addressing a robust crowd at the Prime Minister’s Open Forum held on Sunday, October 28, 2018 at the Edgar T. Morris Primary School in Tabernacle, St. Kitts.

“Under the leadership of Prime Minister Harris, this country was able to deliver for you, the people, the type of advances in ICTs that other countries in the region don’t know about and can’t cope with,” he said. “We have put a brand new refurbished National ICT Centre at the CA Paul Southwell Industrial Park, equipped with about 40 technicians that operate with an innovation hub, software developers, etc. We train hundreds of public servants and private citizens in various aspects of computers and technology.

He described the development of ICT in St. Kitts and Nevis as dynamic, while at the same time referencing the country’s tremendous achievement in 2016, when the Federation was recognized in Botswana, Africa with two awards by ITU for being one of the best in ICTs worldwide. The attorney general said that this is indicative of St. Kitts and Nevis’ newfound dynamism in ICTs under the Team Unity Administration. This, he said, is reflected in the fact that “St. Kitts and Nevis received two out of the three awards.”

Senator Byron continued, “This is what we do every day in this country, for the people of this country, and we will not go backwards, always forward.”