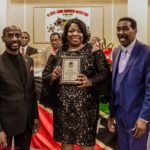 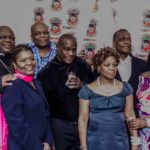 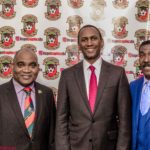 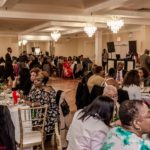 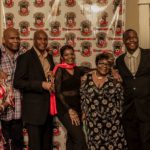 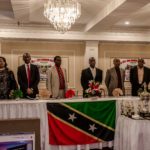 The evening was an opportunity for “Citizens to Celebrate Citizens” and an opportune time for Nationals to fellowship with each other; a timely reunion of sorts.

The guests of honor for the evening were Trevor Twells, RensfordLapsey and Evan Leader. All three gentlemen were lauded for their continued tenure of service in soccer, even after years of competitive involvement in the popular sport.In earnest they represent Betty Friedan’s saying: “Aging is not lost youth but a new stage of opportunity and strength.”

LacillChiverton and Sheila Barrett were also honored for their commendable service to the Club and the Community respectively.

Following the rendition of National Anthems of both St. Kitts and Nevis and the United States of America, Pastor Anthony Nesbitt, invoked God’s blessings on the night’s proceedings.  He warmly bestoweda special prayer for the Executive of the SKNGSC, and all who have committed their time, efforts and resources to ensure the advancement of the Federation’s Youths residing in the Diaspora.

Pelham (Plumb) Warner, the organization’s President, shared brief remarks and emphasized the importance of the contributions of ordinary citizens, who help to keep the work of football enthusiasts and young people alive. He encouraged attendees to continue to give their support to the Youth who help make SKNGSC; a promise of hope for generations of football lovers in the Diaspora.

Ambassador Sam Condor, Permanent Representative of St. Kitts and Nevis to the United Nations,brought brief remarks to the guests, speaking to the upcoming Diaspora Conference to be held inSt. Kitts and Nevis from June 26 to June 28.  He reminded attendees that the objective of the Conference is to provide a forum for dialogue among the Diaspora, Government, its agencies, and other stakeholders. He deems it a timely opportunity to realize the ties between the Diaspora and global partners. Ambassador Condor applauded the work of the SKNGSC and expressed his pleasure in being part of the celebration of citizens in the Diaspora who work tirelessly to improve their lives and to positively impact the lives of others in the process.

The night’s featured speaker was Mr. Larry Quinlan. Larry was born in St. Kitts and migrated to the United States of America at a very young age.  However, he made the point during his brief remarks that his life’s successes have come in part because “people helped him.”  He spoke to the fact that success doesn’t come from gloating about material possessions.  He believes instead that we should appreciate the resources some nationals have been able to tap, with a view to give back.

Quinlan insists that nationals should make a special effort tohelp the next generation by engaging in altruistic work, particularly inyouth sports and academics. Further, he believes that nationals who make an effort to assist students in the Diaspora will help to ensure young people find opportunities for sustainable assistance, particularly with regard to their academic pursuits.

Quinlan’s accolades are impressive. He is a principal at Deloitte, serving as Global Chief Information Officer (CIO), in effect leading an extremely demanding and visible professional life. He has been with Deloitte since 1988 and has served in several leadership roles, including National Managing Principal for Process Excellence. Despite his rigorous schedule, Quinlanis committed to supporting the work of SKNGSC and ultimately, the Federation’s Youth.

Ms. Kerlyn Williams proved to be the consummate hostess, running the program seamlessly and engaging the guests, ensuring that they all enjoyed the event.

Prizes and special awards were given at the end of the program.

Team Captain Mr.Kassal Green delivered the Vote of Thanks and extended special thanks to those who attend the soccer games and encouraged others to attend the series of upcoming games.

The St. Kitts-Nevis Graduates Soccer Club extends heartfelt thanks to all who supported the 14th Annual Awards Banquet.