St.Kitts-Nevis , Minister of Public Infrastructure, Post, Urban Development , Transport and Energy Hon. Ian Patches Liburd Joined other Regional Ministers of Energy on Thursday in a meeting  at the Caribbean Community (CARICOM) Secretariat and were charged to ensure that the progress that the sector is registering is felt by the average Caribbean person.

Barbados Minister of State in the Office of the Prime Minister, Senator the Hon. Darcy Boyce chaired the one-day 73rd Meeting of the Council for Trade and Economic Development (COTED) on Energy, and expressed satisfaction with the progress the Region was making on the energy front.

However, he cautioned that the benefits of those efforts that are being taken filter to the average Caribbean person.

“We also have to make ensure that the benefits of the work that we are doing in energy efficiency and renewable energy redound to the benefit of the average consumer, in the homes, in the businesses of our countries”, he said.

He added that Ministers had to ensure that they paid close attention to making ensure that the benefits reach down to the man in the street”. He pointed out that this was not an exercise in academics, but a matter of practical living.

The Minister also touched on the matter of the Region’s oil and gas potential, which is an item on the Meeting’s agenda.

“I am happy to see some more attention in this Region on oil and gas. While we are all determined to make sure that we benefit as best as we can from renewable energy and energy efficiency, we all also have to bear in mind that if we are the owners of resources, we ought not to let those resources stand there idly but we should use them for the benefit of our countries and for the Region. So I am very glad that we are not shying away from the matter of oil and gas. It is a matter of balancing … oil and gas, with the natural resource of of sunlight, and wind, and water. And this is what it it all about: optimising, getting the best mix of those resources to give our people and our economies what they need”, he said.

Mr. Joseph Cox, Assistant Secretary-General, Trade and Economic Integration, CARICOM Secretariat said that energy was an integral part of the region’s agenda and pointed out the action-oriented nature of the agenda before the Ministers. He said that the stage was being set to advance the regional agenda in a meaningful way and to have finite outcomes.

The transition of the Caribbean Centre for Renewable Energy and Energy Efficiency (CCREEE) to a fully operational stage, and the approval of a Regional Energy Efficiency Building Code (REEBC), are among the matters the Ministers are considering. Mr Cox said that there would be “some action” with respect to the CCREEE. On Tuesday, at the preparatory meeting for the COTED, Montserrat deposited its instruments of ratification of the Agreement Establishing the Centre. The CARICOM Member State became the fifth Member States to do so, effectively paving the way for the establishment of the Centre’s legal identity by mid next month. 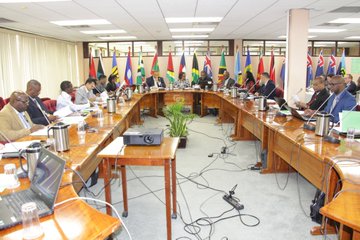 Other matters on which the Ministers will have discussions are energy standards, regional energy security and progress on the Caribbean Sustainable Energy Roadmap and Standard (C-SERMS). They will hold discussions on integrating climate change adaptation within the Strategy against the background of the Region’s vulnerability to intense climate-related events.