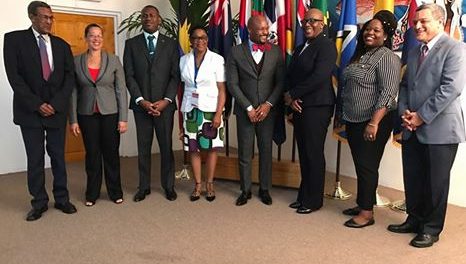 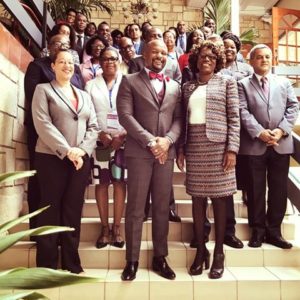 ST.JOHNS, Antigua & Barbuda (April 3rd  2017) – St.Kitts-Nevis Deputy Prime Minister and Minister of Education Hon. Shawn K Richards is currently in Antigua-Barbuda for the inaugural Caribbean Safe Schools Ministerial Forum. Hon. Richards joins ministerial colleagues from throughout the region to participate in the forum which will be seeking to finalise the adoption of the Caribbean Declaration and Road Map on School Safety. The is being  hosted by the Ministry of Education, Science and Technology of Antigua and Barbuda Starting today April  3 to 4 April, 2017. This high-level event aims to promote and raise public awareness on the three pillars of School Safety of the Comprehensive School Safety (CSS) Framework, which guides the Worldwide Initiative for Safe Schools (WISS). The Forum will identify national and joint regional achievements and priorities for School Safety in the Caribbean.

Recognizing that a quality education is the foundation for improving people’s lives and sustainable development, the 2030 Agenda for Sustainable Development, adopted in 2015 by the 193 countries represented in the United Nations General Assembly, reflects the commitment to “ensure inclusive and equitable quality education and to promote lifelong learning opportunities for all” as Goal 4 of the Sustainable Development Goals for 2030. Goal 4 aligns with Priority 3 of the Sendai Framework for Disaster Risk Reduction, Investing in disaster risk reduction for resilience, which aims “to promote the resilience of new and existing critical infrastructure, including water, transportation and telecommunications infrastructure, educational facilities, hospitals and other health facilities, to ensure that they remain safe, effective and operational during and after disasters in order to provide live-saving and essential services”.

In order to advance progress in this regard, the Sendai Framework recognizes that schools should incorporate disaster-resistant structures according to local contexts, while at the same time calling for knowledge and awareness of hazards and risk to be part of the school curriculum in order to bring about behavioural changes that support disaster risk reduction and greater resilience.

The Worldwide Initiative for Safe Schools (WISS) is a government-led global partnership for advancing safe school implementation, as conceived in the High-Level Dialogue Communiqué of the Fourth Session of the Global Platform for Disaster Risk Reduction (May 2013) and approved during the Third World Conference on Disaster Risk Reduction in 2015 in Sendai, Japan.

In addition to Deputy Prime Minister Richards the Caribbean Ministerial Forum will include the participation of the Hon. Michael Browne, Minister of the Ministry of Education, Science and Technology, Antigua and Barbuda and other high-level delegates from 12 Caribbean countries and territories, as well as representatives of intergovernmental organizations such as Ms. Elisabeth Riley, Deputy Executive Director of the Caribbean Disaster and Emergency Management Agency (CDEMA) and Ms. Katherine Grigsby, Director and Representative of the Kingston Cluster Office for the Caribbean, United Nations Organization for Education, Science and Culture (UNESCO), among others.

Disasters have a major impact on children, youth and education systems. Studies suggest that each year, 175 million children worldwide are likely to be affected by disasters, and children in the Caribbean are no exception. In 2004, Hurricane Ivan resulted in widespread destruction in Grenada, damaging 73 of 75 public schools. In 2010, 38,000 students and 1,300 teachers and education personnel lost their lives during an earthquake in Haiti, which also destroyed 4,000 schools as well as the headquarters of the Ministry of Education and disrupted the education process of an estimated 3 million students. These figures are likely to increase unless measures are taken by countries to improve capacities to anticipate, prepare, adapt and become more resilient to such hazards.

The Caribbean is a region of high exposure to multiple natural hazards including hurricanes, floods, volcanic eruptions, earthquakes, windstorms, tsunamis, landslides and droughts. Vulnerability combined with exposure to such hazards can serve to drastically undermine poverty reduction strategies, hinder development gains and jeopardize educational systems.  At the same time, the Caribbean region is also acutely susceptible to the negative effects and impacts of the increased frequency and magnitude of extreme weather and climate-related events which are exacerbated by climate change and variability.  Such events, if left unmitigated, can lead to devastating consequences to a nation’s economic, social and environmental wellbeing.

Significant advances have, however, been made in recent years in terms of disaster risk reduction and resilience, as exemplified by the Caribbean Disaster Management Framework (CDM) and recent efforts to ensure harmonization of the CDM with the Sendai Framework. At the same time, in keeping with the region’s commitments to global agreements such as the Sendai Framework, the Paris Agreement and the SDGs, Governments from throughout the Caribbean are making notable strides towards this common agenda.