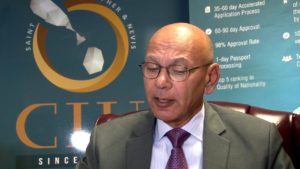 The measures taken to restructure and rebrand St. Kitts and Nevis’ Citizenship by Investment Programme (CBI) continue to yield benefits, as the country’s programme is once again recognized internationally, this time as the “most trusted and successful programme of its kind.”

Henry Martin of Flickread.com, in a recent article that featured an interview with Chief Executive Officer of the Citizenship by Investment Unit (CIU), Mr. Les Khan, described the Federation as a dual nation that “punches well above its weight thanks to a Citizenship Investment Programme that has become the world standard, not to mention well-administered and thriving tourism and real estate sectors and a financial services industry that continues to go from strength to strength.”

In the article, Mr. Khan was quoted as saying that additional changes in the operating process have re-emphasized their desire to have the most service-oriented CBI programme.

When asked to comment on the enduring appeal of St. Kitts and Nevis’ CBI programme, Mr. Khan responded by saying, “We work with clients, agents, developers and service providers to ensure that the client’s expectations are met. Service providers can now interact with CIU management on a daily basis, and developers and agents can now have scheduled meetings upon request. This change in operating models [as well as] the efficiency and effectiveness in processing, together with the large number of citizens who testify and market themselves as proven ambassadors of the programme, continue to endorse what we believe is the platinum standard.”

The head of the country’s Citizenship by Investment Unit further stated that the Government of St. Kitts and Nevis continues to work towards making the Federation’s passport one of the most valued passports in the Caribbean, as this will help to further cement the nation’s preeminent status in the CBI industry.

Mr. Khan continued, “The Prime Minister and his Cabinet are aggressively working on improving diplomatic relations with other countries and in increasing visa-free access. Additional investment options are being considered and other product offerings are to be announced shortly.”