NOW THE 2ND HIGHEST RANKED CARIBBEAN NATION IN THE WORLD.

Team St.Kitts-Nevis has again made strides up the FIFA World Rankings. In the latest FIFA Rankings released on March 9th the Sugar Boyz moved 4 notches up from #77 to #73. They moved up ahead of Jamaica and Trinidad and Tobago thus making them the 2nd Highest Ranked Caribbean team in the world behind only Haiti.

SMALLEST NATION EVER TO BE RANKED THIS HIGH 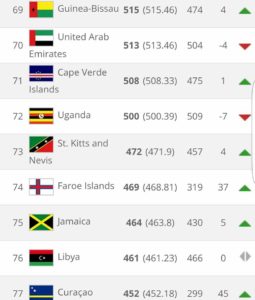 The spot puts St.Kitts-Nevis, a country witha population of 50,000 ,  ahead of teams like China with a population of 1.3 Billion  and Just below countries like Scotland, Russia, Bulgaria and South Africa . The Team has now also leap-frogged over Caribbean Powerhouse Jamaica and is now the 2nd Ranked Team in the Caribbean . This is the highest the Team has ever been ranked and the smallest country in the world to be ranked this high in the history of the FIFA World Rankings.

The FIFA top ten in March: