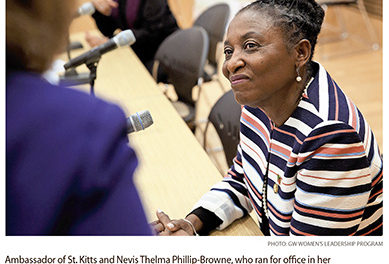 The #MeToo movement has raised awareness of how pervasive gender inequality is around the world, while persistent allegations of infidelity and sexual harassment swirling around President Trump have raised red flags among many women voters. Both have galvanized women to speak up about abuse and make their voices heard in the political arena.

Despite the revival of women’s rights in the national discourse, women still face significant hurdles in getting ahead in a man’s world — whether it comes to Hollywood, diplomacy or the White House. As bumpy as the path toward equality continues to be for many women, it can be even more daunting for students looking to enter male-dominated careers.

That’s why role models who can offer advice and support are especially critical for young women hoping to climb the career ladder and eventually reach — and perhaps finally shatter — the proverbial glass ceiling.

On a quiet spring evening in Northwest D.C., about 80 young women, most of them undergraduate students at The George Washington University, converged at GWU’s satellite campus on Foxhall Road to get a lesson in female leadership and camaraderie.

Dressed for business in blazers and blouses, they filed into Ames Hall chatting amiably. A tinge of nervous excitement crept into their voices as they made their way downstairs, where four female ambassadors were waiting to meet them — not an everyday sight, even in Washington. The occasion was a March 29 symposium hosted by the Women Leadership Program (WLP), a selective, year-long living and learning program for freshmen women of any school at the George Washington University.

The hour-long panel featured Ambassadors Maguy Maccario Doyle of Monaco; Hunaina Sultan Ahmed Al Mughairy of Oman; Mathilde Mukantabana of Rwanda; and Thelma Phillip-Browne of St. Kitts and Nevis, each of whom shared the common challenges and distinct experiences that marked their professional journeys.

“Women should lean in, so I will lean in,” moderator Tara Sonenshine began as she adjusted the microphone on the podium in front of her, eliciting a round of raucous applause.

Sonenshine is something of an authority on the subject of “leaning in.” She served as undersecretary of state for public diplomacy and public affairs under the Obama administration, worked as an advisor for President Clinton and won 10 Emmys and other journalism awards for programs on domestic and international issues.

Yet Sonenshine remains the exception, not the rule, in terms of women occupying the upper echelons of power, especially in politics and diplomacy. In 2016, the Pew Research Center conducted a study of American Foreign Service data and found that only 9 percent of U.S. ambassadors who have served in foreign nations have been female. That is less than 500 out of approximately 4,600 American diplomats.

The numbers for women in U.S. politics are equally lopsided.

According to the Women & Politics Institute at American University, the U.S. still ranks 90th in the world in the percentage of women serving in national legislatures. When the 113th Congress convened in January 2013, 82 percent of its members were men. Three-quarters of statewide elected officials and state legislators are men. Men also occupy the governor’s mansion in 44 of the 50 states, and they run City Hall in 87 of the 100 largest cities across the country. Moreover, in every U.S. state, men earn more than women.

But the tide may be gradually shifting, partly in response to factors such as the global #MeToo movement, the loss of Hillary Clinton’s presidential bid and the growing backlash against Trump and the various allegations that have dogged his presidency.

According to an April 6 article in The New York Times by Jonathan Martin and Denise Lu, Trump may in fact be serving as a recruitment tool for Democratic candidates. “Notably, there are even more Democrats running for the House this year than there were Republican hopefuls in 2010, when the Tea Party uprising against Mr. Obama helped sweep in 63 new House Republicans,” they wrote.

This surge is being driven largely by women, with a historic 30 percent of female candidates on the House Democratic ballot. And according to a recent analysis by the Associated Press, a total of 309 women from both major parties filed candidacy papers to run for the House. That tops the previous record of 298 in 2012.

Likewise, while diplomacy remains an overwhelmingly male-dominated field, women have made significant strides toward closing the profession’s gender gap, especially over the last decade. During the Obama years, about a third of all diplomatic appointments were women; that figure has remained steady under Trump.

It was on that note that Sonenshine directed the audience’s attention to the panelists, who spoke about their professional and personal lives, and the relative strengths and struggles of women in diplomacy. Ironically, none of the women started off wanting to become diplomats. Maccario Doyle began her career promoting tourism in New York, where she eventually became her country’s consul general. Al Mughairy was an economist by training whose husband served as Oman’s ambassador to the United Nations. Mukantabana was a refugee whose life was irrevocably changed by the 1994 Rwandan genocide.

Yet all of the women have used their unique backgrounds to inform their work as diplomats, while overcoming many of the common obstacles that women from all walks of life face.

The ambassadors cited gender as the biggest obstacle they’ve encountered on their respective career paths. The women all agreed that the historical norms restricting women from taking on leadership roles persist to this day. For example, Phillip-Browne argued that women face a higher degree of scrutiny and are held to higher standards than their male counterparts.

“I put a question to some ladies: Would you vote for a woman? And they say to me, ‘Well, if she is qualified.’ You won’t say that about a man,” she pointed out. Phillip-Browne, a former dermatologist who herself ran for an assembly seat in her Caribbean homeland in 2004, said that any woman seeking a position of power “will have been examined and questioned” in ways that men generally are not.

For instance, women seeking political office must often walk a fine line between coming off as passionate, but not emotional; assertive but not aggressive; knowledgeable but not know-it-alls; approachable and feminine, but not in any overtly sexual way. Pundits and the media still routinely comment on female candidates’ married lives, whether they have children, whether they smile enough in public appearances and their choice of clothing — descriptions that rarely apply to men.

The uneven application of standards, according to Phillip-Browne, makes it difficult for women to pass muster and move forward in their careers.

Al Mughairy likewise warned the students that “there’s always a glass ceiling somewhere,” oftentimes imperceptible until one collides with it.

Indeed, Embassy Row appears be trapped under a glass ceiling of its own. At present, only 21 out of the 177 foreign delegations headquartered in Washington have female ambassadors; the highest that number has ever reached was 27, back in 2013. Researchers at the Georgetown Institute for Women, Peace and Security have attributed that brief spike to the “Hillary effect,” referring to a trend among foreign governments to send over more female diplomats when a woman is in charge at the State Department. Only time will tell whether the record will hold or shatter.

Since it is still so rare for women to make it to the top of the diplomatic field, the ambassadors at the GWU panel emphasized the importance of community and how crucial a solid support system was to their success.

According to Maccario Doyle, a strong role model can be instrumental in setting a person on the right track. She reminisced about her conversations with Grace Kelly — the former actress turned Monaco’s American-born princess — who once told her: “Maggie, just keep focused on where it is you want to go.” Maccario Doyle said the princess’s advice guided her “throughout my career,” which included a stint as head of the Monaco Tourism Board in North America, where her biggest project was a series of events in 2007 celebrating the life of Princess Grace, who gave up her career as a Hollywood icon to marry Prince Rainier of Monaco, raising money for the Princess Grace Foundation-USA.

Phillip-Browne also noted that men are key allies in the fight for gender parity, and she encouraged young women to work in concert, not in competition, with one another. Women, she added, are particularly well-suited for the kind of collaboration that diplomatic work entails.

“All of us are diplomats, and especially women,” she said. “If you look at the definition of diplomacy, we’re really messengers, taking the message from our country to another country in a sensitive way, in a way that is receptive, and palatable and diplomatic. Who better to do that than women?”

As women’s stake in world affairs continues to grow, the transition away from patriarchal traditions has taken on different forms in different cultures. For instance, America remains one of the few Western powers that has not yet elected a female head of state. According to the Georgetown Institute for Women, Peace and Security, women’s share of legislative seats in the U.S. amounts to just 19 percent, compared to 56 percent in Rwanda.

Yet even seemingly progressive countries deal with pervasive misogyny. Nordic countries, for instance, are world-renowned as pioneers of gender equality. Sweden in particular developed the world’s first (and only) “feminist” foreign policy; roughly half of the diplomatic corps is split between women and men; and it boasts a long tradition of government policies such as generous parental leave that have made it a trailblazer in promoting women’s rights.

Yet #MeToo revealed that women still face an uphill struggle in countries like Sweden, where the movement spawned a wave of viral campaigns detailing rampant stories of rape and harassment in virtually all sectors of society, from politics to sports to academia (also see “Hailed as Champion of Gender Equality, Sweden Learns It Still Has Some Catching Up to Do” in the February 2018 issue of The Washington Diplomat).

What is important, according to Rwanda’s Mukantabana, is that “there has been progress.”

She explained that systemic change is “a journey you take for generations.” It’s a personal observation for Mukantabana, whose nation has spent the past three decades recovering from the brutal genocide it endured in 1994.

Mukantabana, a member of the Tutsi ethnic group, began teaching history at Cosumnes River College in Sacramento in 1994 just as hundreds of thousands of Tutsi were massacred by members of the Hutu majority. The same week that she was hired by the college, she learned that among those killed were both her parents, three sisters, two brothers, six aunts, four uncles and all of her nieces and nephews. In response, Mukantabana started a social work program at the National University of Rwanda, training people who continue to help survivors deal with the aftermath of genocide.

“Having amnesia doesn’t help,” she said. “Remembering the past is important.”

Above all, the ambassadors encouraged the young women to build on the progress of the last generation. Maccario Doyle urged them to “set your target right at the top and don’t let anything dissuade you from getting there…. Be strong and have faith in yourself.”

Many in the audience stayed behind to talk to the ambassadors, who were eager to keep up the conversation. “Events like this expand and alter our students’ horizons and perspectives,” said Mary Buckley, an associate professor of dance at GWU and a director in the Women’s Leadership Program. “It offers our young women leaders inspiration, and it models the possibilities that exist for them as they navigate the professional world.”

The discussion was part of WLP’s ongoing efforts to offers its students the benefit of small classes, close contact with faculty and women in leadership roles, and strong community ties.