When Caribbean Smooth founder and St. Kitts National Nigel Walwyn visited his father in St. Croix in 2010, he handpicked sun-ripened mangoes, coconuts, and passion fruit as he did as a child growing up in St. Kitts . This time however he added some rums, spices and other ingredients to create a concoction that blew his mind. That mind-blowing experience was contagious and over the next few years as his family, friends and colleagues took sips of this amazing drink that Walwyn made at home. Almost immediately he began getting feedback about this St. Kitts passion fruit drink. Family, friends and colleagues would tell their family, friends and colleagues about this unique St.Kitts Caribbean rum punch they enjoyed and of course, he would get calls about how they could try it. 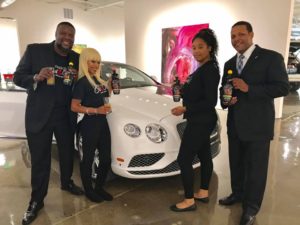 After years of making this delicious fruit drink from scratch, he concocted an adult beverage pairing his fresh juice with St. Kitts and Caribbean rums and spices.

When asked about where the idea of launching a Rum Company came about he pointed to his St. Kitts upbringing and the entrepreneurial spirit of his mother and his father who owned a Construction company on St. Kitts.

“I’ve been asked where did the idea of launching my own liquor line come from, more times than I can count. For that answer I often go back, way back to Buckley’s Site or what the folks in St. Kitts affectionately call The Village. Walwyn Avenue to be exact, the street where my first memories as an impressionable and adventurous child started after I left England. I remember spending a lot of time in the kitchen watching my mom prepare meals not only for her husband and son but also her brothers-in-law and father-in-law. My mother introduced me to a lot of things but what she did in the kitchen resonated and I believe helped shape the person I am today,” said Walwyn.

Back in Atlanta, Nigel’s fruity mixture gained a steadily growing fan base, eventually encouraging him to leave his 25-year career as an award-winning television journalist to take up entrepreneurship. In 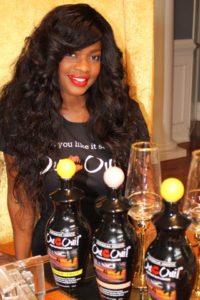 March 2014, Nigel set out simultaneously to learn about business and researching the alcohol industry. He developed his concoctions into a product that could be mass-marketed, and built new relationships. In the first months, Nigel basically went back to school by attending classes put on by SCORE, self-teaching with the aid of the SBA Learning Center, and even mirroring the master’s program undertaken by his girlfriend through Strayer University. Armed with a treasure trove of new knowledge, Nigel proceeded to build his management team, secure permits and licenses, and began looking at ways to raise capital. He quickly found out the alcohol industry is extremely capital absorbing, and his dream would go nowhere without an infusion of funds to start production. The next 18 months of sharing his vision with anybody who would listen and pitching potential angel investors went nowhere. A crowdfunding campaign helped raise some funds, but nowhere near the goal needed to get started. However, it helped boost the owners’ equity, and when the opportunity came to meet a banker interested in helping new and small businesses enter the liquor industry, Nigel and his team were ready. The meeting led to an introduction to Sandy Headley with Access to Capital for Entrepreneurs (ACE), and she became impressed with Nigel’s journey to make his dreams a reality.

Nigel and Sandy immediately began working on the process to get approval for an ACE Community Advantage loan. With no sales, no collateral, a decent credit score, and attractive financial projections, Nigel and his startup fit the profile for which the SBA Community Advantage program was created. Months of document gathering and due diligence came to a jubilant conclusion as Nigel closed on his SBA loan, precisely three years after he founded the company. Production started immediately on the inventory for the introduction of his Ou-Oui! Premium Rum Liqueurs. Ou👄Oui!® Premium Liqueurs will retail for under $50. Sales began in May 2017 in Georgia and New York. Let’s Sip ‘N Say Oooo-Weee! to