St.Kitts music Legend  Oswald “Ham”  Caines is dead . The 61 year old former Bassist and Vocalist for the GI’s Brass International was killed after his Ford F250 overturned in Florida.

Caines sang Co-Lead on Ellie Matt’s Viva St.Kitts and also played lead an rhythm Guitar on the iconic track. He also played and toured briefly with  Ellie Matt and the GI’s Brass .

According to Florida Highway Patrol, the crash happened at 4:41 a.m. on a portion of Interstate 275, north of Tampa’s Fourth Street.

All four vehicles involved in the crash were traveling in the northbound lanes, according to Florida Highway Patrol.

A Toyota Corolla swerved to miss a dolly cart lying in the outside lane and was struck by an RV in the next lane. The Corolla then struck the inside barrier wall, according to FHP.

The RV, however, lost control and went toward the outside shoulder of the road. 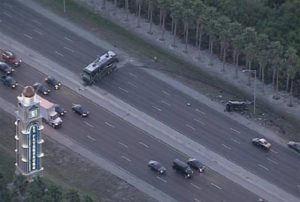 At 4:41 a.m., a car struck the dolly and lost control, hitting the RV, which then crashed into the barrier wall. Another vehicle then struck the RV and overturned. Bay News 9

A Maserati and a Ford F250 driven by Caines were both in the outside lane and slowed, trying to steer away but the Maserati struck the back of the truck, according to FHP.

The Maserati was able to pull to the shoulder, however the truck was propelled forward by the impact and overturned, landing in the path of the RV, according to FHP.

The RV hit the truck and drove toward the shoulder until Caine’s F250 disengaged, overturned and stopped. However, the RV continued back across the road until it struck the concrete barrier wall, according to FHP.

Caines died from his injuries after he was taken to an area hospital, according to FHP. A Spring Hill woman and driver of the Corolla, suffered serious injuries. It is hoped that the services of an auto accident lawyer will secure the woman the justice she deserves in the courtroom. For now, making a full recovery is the primary concern.

The driver of the Maserati walked away from the crash scene. 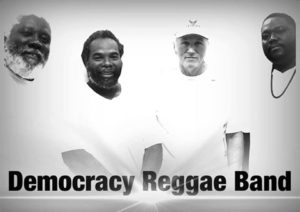 Caines was a well known figure in the Sarasota Entertainment Scene with his  Democracy Reggae Band where he was  bandleader, bass player and vocalist for the 4 man musical group. The uplifting Reggae,Soca,Hip-hop,R&B,Top 40 band has been sending their musical vibes out to the people for over 20 years! the group makes you feel the music, getting everyone dancing and jumping till they sweat. They always leave the audience wanting for more. Besides playing at about every local club there is in Tampa, St. Petersburg, Bradenton, Sarasota and Venice, they have opened for many big name performers. Such as, the “Bad Boys” of reggae Inner Circle, Third World, Steel Pulse, Shabba Ranks and Yellowman, just to name a few.