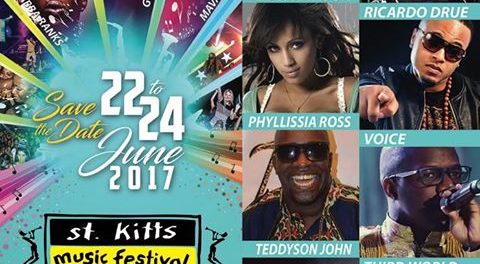 The newly crowned International Soca Champion is among the second wave of an impressive list of artistes who have been added to the list of performers to appear at the 21st Annual St. Kitts Music Festival, from Thursday 22nd to Saturday 24th June, 2017.

The Organizing Committee of the Festival has confirmed that the rising soca sensation known as VOICE, has been drafted for this year’s three-night extravaganza at Warner Park.

Performing in front of tens of thousands, Voice rolled over a core of experienced and budding soca giants, with his popular hit, “Far from finished”.

This is his second victory in two years, having also captured the crown in 2016 with the well-known single titled, “Cheers to Life”.

Also enlisted to pack his bags for St. Kitts in June is Lyrikal, with his powerful tune, “Cloud 9”, along with Ricardo Dru, who has had a string of outstanding hits, including “Vagabond”, and Teddyson John, whose super hit, “Allez”, has been a crowd pleaser in fetes across the Caribbean and North America.

Ricardo Drue is also the holder of the Antigua Soca Monarch title.

With memories of the successful 20th Annual Festival still lingering in the minds of music fans, the tempo is already building for another dynamic presentation featuring some of the world’s leading artistes in various genres, including Soca, Calypso, Reggae, Dancehall, R&B, and Rock & Roll.

The rhythms of the St. Kitts Music Festival will appeal to all musical taste buds and that is why reggae fans will be happy to welcome, once again, the Third World band of Jamaica, which has produced international hits like “Always Around”, “96 Degrees in the Shade and “Sense of Purpose.” The band is this year engaged in its 40th Anniversary tour.

A rising superstar, known as Phyllisia Ross, who has had successful collaborations with big names such as Ne Yo, on a song titled, “Sunshine“ and with Jah Cure, on the chart busting, “Call on Me”, is a new addition that will thrill concert goers. Her most successful single to date in “Konsa”.

Phyllisia Ross is a pop and R&B vocalist who made her entry on the music scene in 2009, with “Sunshine”, and since then has been climbing the mountains of success, including reaching the Billboard charts.

While in St. Kitts she will be teaming up with the Alliance Francais to host a musical workshop focusing on French influences.

Also making his first appearance, at what has become the leading music festival in the Caribbean, is the reggae artiste, Ed Robinson.

Robinson has worked with Maxi Priest, Buju Banton, Snoop Dogg, Luciano and others and is best known for highly acclaimed tracks like “knocking on Heaven’s Door and his remake of Dennis Brown’s, “If I follow my mind”.

The first wave of artistes was released during a media and corporate launch of the festival on Monday, 30th January. The names revealed then were Mavado, Jah Cure, Goo Goo Dolls and Shabba Ranks.

The final roster, with all remaining performers to be announced, is expected to be released in coming weeks.

The St. Kitts Music Festival, which was started in 1996, will be held at the Warner Park Cricket Stadium in Basseterre.