BASSETERRE (23 June, 2015): The Caribbean Queen of Comedy, Rachel Price, will be making a special guest appearance on the 19th Annual St. Kitts Music Festival, set for this week Thursday to Saturday, in the Warner Park Stadium.

The often controversial and all the time funny comedian and extremely popular radio and TV personality, will make appearances on Thursday and Friday. Price will also do a full set as part of the much anticipated Final Night of the festival. Price will be doing her comedy routine alongside Festival headliners Trey Songz and Jason Derulo. Price will be the lone female performer on the final night on June 27th 2015.

Minister of Tourism the Hon. Lindsay Grant stated that the inclusion of Price along with the earlier announced Sports Illustrated Model Damaris Lewis was a part of what he labeled as the evolution of the festival from simply a Music Event to an overall Entertainment Event.

“This no doubt will be an exciting new dimension to the festival and one which will no doubt again set the annual festival far and apart from other festivals throughout the region and the world,” said Minister of Tourism Hon. Lindsay Grant 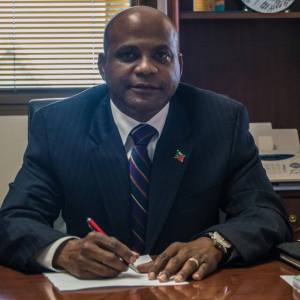 Price’ appearance will be the first time that a Comedian will be hosting and performing at the festival.

Tickets for the 19th Annual St. Kitts Music Festival are US$40/EC$100 nightly, and season tickets are US$105/EC$270. Tickets can be purchased from Tourism Events Unit – Ministry of Tourism on Port Zante, TDC Business Center – Central Street, Football Ticket Outlet – Warner Park,  and at the St Kitts Marriott Resort. In Nevis tickets can be purchased from the City Drug Store 2005 Ltd in Charlestown.

She has been described by many people in many different ways but most will agree on “Raunchy”, “Sexy!”, and “Unapologetic!” In your face humor! All phrases which accurately describe Rachel Price. “Pricey” as she is affectionately called by the masses that claim her, began her professional career as the “MC” of a weekly cabaret in 1994. She quickly became known for her rapid retorts and “down to earth” appeal. From then on she joined a band of Trinidadian actors who wanted to “try” stand-up comedy. Rachel Price’s performances at the comedy club then known as ‘Just Friends’ are regarded as legendary.

It was very soon after she joined the cast of Kaiso House to pick up MC duties among some of calypso’s finest. In the last 7 years she has become the leading female comedian in the Caribbean region and among Caribbean people world wide her name is synonymous with not only laughter but the positive message that always accompanies her hilarious routines. She is known for her caustic remarks and on point social commentary. Critics and fans agree very few people have made such an incredible impact on the comedy circuit in the region…and it’s communities globally Very few people do true stand-up. The ability to just stand on any stage and connect with every person in the room is nothing short of a blessing. To quote Pricey, “Anything can be made funny, just open your mind”.

Lead actress in an award winning sitcom in Canada “Lord Have Mercy”, lead actress in the play “Fat Pig” and host of Carnival on the Promenade as well as she is the co-host of the number one morning radio program on the leading radio station in Trinidad 96.1 WEFM.

Being a single mother, life isn’t easy so the issues of women and children and the subsequent scenarios are areas she readily identifies with. “When life gives you lemons squeeze the hell out of them”.

Hecklers are welcome but beware! All hail the undisputed Queen.