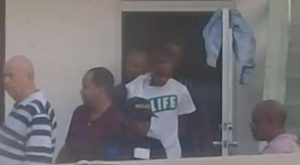 Ryan is escorted from his home after he was arrested for the murder of the two men. Photo: Provided

ROAD TOWN, Tortola, VI – A St.Kitts man and a female have been charged with the murders of two men, David Springette and Shawn H. Richards who were killed earlier this year.

The two are Shakeel Ryan, 22, a St. Kitts national and a female, Shakilla Hanley, 29, both of Long Look.

In addition, both of them were also charged with a separate count of attempted murder in the case of David Springette.

The duo is currently in police custody awaiting their day in court.

In a press release issued by the Police Information Department, Commissioner of Police Michael Matthews said he is grateful for the painstaking, dedicated teamwork that went into making the arrests. 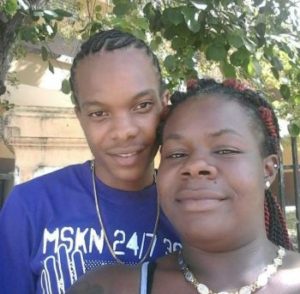 Shakeel Ryan and Shakilla Hanley have been charged with the murders of David Springette and Shawn Richards who were killed earlier this year. Photo: Provided

“It is very difficult to resist the temptation to response and defend the Force when those in the community give commentary on its actions or inactions particularly those who see murders solved in the hour span of a prime time TV show. However, compiling the evidence to bring perpetrators of gun crimes in particular murderers to justice takes a lot longer than an hour and requires a great deal more effort. Very few appreciate or understand the difference. In these types of investigations, unfortunately, the least said, the better for us,” Mr Matthews commented.

The Commissioner also commended members of the Major Crime Team for their dedication on this case and all other cases.