“We have the evidence in health, in the security sector. In 2007 the United Nations Office on Drugs and Crime produced a report entitled Crime and Violence in the Caribbean, and I quote, Drug trafficking is the cause of the gun-related homicide, end quote.

“Where there are drugs there are guns. The gun culture is everywhere. Can we bring it to an end in St Kitts and Nevis, the answer is yes we are 50,000 people,” said Dr Martin, speaking on a programme on WINN FM on Monday.

He told listeners that “there is no denying the fact” that people know those who are involved in the illegal drugs trade and that the guns are used to protect the trade.

“We know that retribution or revenge or retaliation, the three “r” are fundamental to the gang culture. If something is missing you suspect the rival gang, you don’t ask any questions, you shoot first.”The question is what do you do about a plant that has proper uses in the culture that has been made illegal or criminal for some strange reason and there is some evidence that shows the people who made the use of marijuana illegal and criminal were not responding to data, they are responding to hysteria.”

The medical practitioner said that this is a discussion “to my mind…we have to continue”.

He said guns are used to protect the profit of the illegal trade.

“It’s the profit motive. The use of marijuana in this country is culture and therefore people should be able to buy marijuana. Demand for marijuana is universal,” he said, arguing that the State spends a lot of funds on policing and prosecuting marijuana users. Of course, marijuana is becoming more mainstream, with the availability of dispensary supplies, online stores for the drug are doing very well. Just like patients in Florida have the option of getting their hands on product simply by searching something like medical marijuana florida, people in St Kitts also want the same option. Marijuana-related products are accessible and available to online shoppers through sites like this – https://www.leaf2go.co/EDIBLES_c_55.html – and the hope is that this will be replicated in other nations too as it becomes more acceptable and legalized.

“What we have to do as intelligent independent people is to have an intelligent conversation on data and stop filling up our jails of people who are probably self-medicating.

“I could understand persons who are trafficking and selling to minors and stuff like that. We have to put some limits. Since the Rastafarians regard the marijuana as a sacrament it ought not to be used to make a profit. 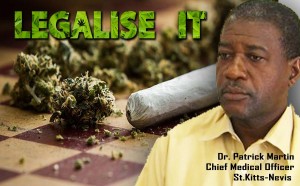 “So persons who are profiting and targeting young people …they are outside of the rule of sacrament. I have no sympathy for those persons. But there are bona fide spiritual and medicinal use of the plant and we are wasting our time and resources going down the road of criminality only,” he told listeners.

Meanwhile, police are continuing their investigations into the latest acts of criminal violence here, when 20-year-old Cameron Liburd was shot on Sunday night a few hours after 24-year-old Hassan Evan was shot dead in a drive-by shooting.

Police said two other people were also injured during the attack. They said on Saturday three people were shot multiple times and taken to hospital for treatment.