Basseterre, St.Kitts (August 13th 2015):- The NIOSH Report on the BHS has been released but the needle has not been moved. The status quo remains as the Report , like both the Cariri and Carpha Reports before it, is inconclusive. In other words, none of the reports have been able to identify what caused the very real and widespread occurrences of various sicknesses of staff and students at the Federation’s largest High School. 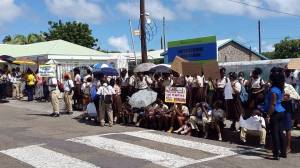 In 2014 Scores of students from St.Kitts-Nevis’ largest High School the Basseterre High School staged major protest just outside the school grounds as pictured

Noted Medical Doctor and Internist at the JNF Hospital, Dr. Bichara Sahely, outlined a number of concerns regarding the most recently released NIOSH Report. His concerns were as follows:
• The school was unoccupied during their evaluation.
• There were visible water stains in some buildings, which suggested past or current water infiltration, this, at a time when we are experiencing a very dry spell with minimal rainfall, and possible under conditions not representative of the time when the school was occupied.
• This was an INDOOR environmental quality evaluation, although some of the PREVIOUS concerns were related to 1) high Hydrogen Sulphide (H2S) spikes at several OUTDOOR locations, and 2) contaminated soil possibly related to malfunctioning sewage and soak-away pits, some of which were even discovered after the CARIRI and CARPHA Reports.
• H2S was measured only in ONE location, that is in the chemistry laboratory over a short period of time.
• They highlighted other variables, which were not considered in the previous reports, such as temperature, relative humidity and mechanical ventilation issues (although these were assessed when the classrooms were UNOCCUPIED).
• They advised to “STOP ANY ADDITIONAL ENVRIONMENTAL AIR SAMPLING AND PROPOSED SOIL SAMPLING FOR BACTERIA.”
• Given the non-specific symptoms of the students and teachers and a “smoking gun” agent was not found during their evaluation, they focused primarily on a hierarchy of controls approach, from engineering controls such as proper and adequate mechanical ventilation, moisture/mold mitigation and pest control, to administrative ones.
• They encouraged a proactive approach with collaboration among administrators and employees and provided links to official documents on mold issues and its mitigations.
Over 200 plus students reported very real symptoms and illnesses. In a student population of just about 800 that number is worryingly high which no doubt led to the concerns expressed and the actions taken by students, teachers and parents to demand that the school be thoroughly evaluated to determine what was the cause of these high incidence of various sicknesses. None of the three reports presented by regional and international agencies over the last 2 years have identified the cause of the sicknesses among the campus population.

The NIOSH Report was incomplete based on what was mandated according to officials. The assessment of the Report by Dr. Bichara Sahely and many others suggests that the Report has not brought the matter any further than it was when the last reports from Carpha and Cariri were presented.

BHS Teacher Ms Jenifer Williams dsiplays rashes on her skin which was attributed to conditions at the BHS Campus. (2014)

The facts in the matter remains, and the facts have always been that something at the school campus is responsible for the spread of illnesses among hundreds of persons both attending and associated with the school. The regional and international bodies have not identified what is the source of the sickness, or as Dr. Sahely stated, none have identified the “smoking gun”.

The obvious action therefore must be the tried, tested , proven and universally accepted action to ERR ON THE SIDE OF CAUTION.

Deputy Prime Minister and Minister of Education, Hon. Shawn K. Richards, has stated emphatically that a new BHS is the priority of his Ministry and the Team UNITY Government. The inconclusive NIOSH Report is unlikely to change that stance as the Nation is in full support of a new state- of- the- art high school. Government will shortly issue a statement regarding the issue but the consensus within the Nation and among parents and teachers remains ERR ON THE SIDE OF CAUTION. Until a “Smoking Gun” is found, the BHS Campus should be off limits for any FULL TIME educational activity.