Tweet
Basseterre, St. Kitts, (November 20, 2018 ): As the local cruise tourism sector expands, the Federation is attracting more than one million passengers per season – a distinction which has resulted in its marquee status designation by the Florida-Caribbean Cruise Association (FCCA).

“We are having bigger ships. And so, on December 11, we are going to welcome Symphony of the Seas [for its inaugural visit], which is the world’s largest cruise ship that will bring a passenger count somewhere in the region of 7,600; 10,000 tops, including the crew,” said Minister of Tourism, the Honourable Lindsay Grant at the recent Prime Minister’s press conference.

Symphony of the Seas is part of the Royal Caribbean International cruise ship fleet. During the 2018- 2019 Cruise Season, two other Oasis Class ships, namely Allure of the Seas and Harmony of the Seas will dock in St. Kitts. 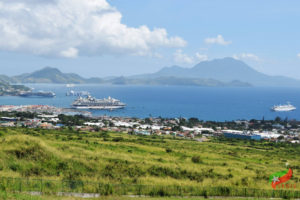 Out of the 28 cruise liners scheduled to come to the Federation of St. Kitts and Nevis for the 2018- 2019 Cruise Season, Royal Caribbean has the largest capacity ships, as well as the most port calls. Eight ships in its fleet are scheduled to visit a total of 85 times; second in line is Carnival Cruise Line, with 75 port calls in total by five ships, followed by Norwegian Cruise Line, which is scheduled to make 28 port  calls from seven ships.

Minister Grant said that the reality is that the tourism sector in St. Kitts and Nevis is growing, adding that, “The future looks very bright for us… we are building the second cruise pier, which is really going to enhance our competitiveness and so we expect nothing less.”

It’s the perfect time to book the perfect trip. As tourism is still developing, there is a lot of culture to sink your teeth into. There are many ports you can sail from and there’s always good booking opportunities. There are now opportunities to get cruise deals from southampton, UK. It would be a shame to miss out on such a beautiful destination.

The formal agreement to initiate the US $48 million dollar project for the construction of a second cruise pier at Port Zante, St. Kitts was signed in 2015. Upon completion, it will be able to berth two Oasis Class vessels.

The arrival of bigger cruise ships is translating into increased tourism revenues in the Federation. According to the 2018 BREA Report, in 2018, total passenger spend in St. Kitts was US $133.02 million compared to US $75.30 million in 2015 – a whopping 77 percent increase.