The Prime Minister of St. Kitts and Nevis, Dr. the Honourable Timothy, who is the lead Head for Health and Human Development in the CARICOM Quasi Cabinet, said the region welcomes the launch of the Defeat-NCD Partnership, which is a new public–private partnership established to progress sustained actions against non-communicable diseases (NCDs).
In his well-received presentation, Dr. Harris described the Defeat-NCD Partnership as “a most welcomed and much-needed initiative” as the Caribbean region in particular continues to grapple with the increasing burden of NCDs and the escalating effects of climate change. 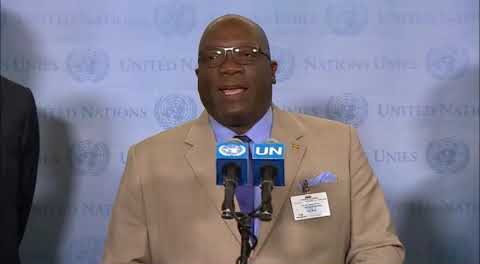 Photo: St. Kitts and Nevis Prime Minister participates in the launch of the Defeat-NCD Partnership.

Prime Minister Harris was at the time addressing the launching event of the Defeat-NCD Partnership held earlier today at the United Nations Headquarters in New York, where he advocated for greater international attention and resources for Small Island Developing States (SIDS) to help curb the high incidences of NCDs.

The launch event, which was held on the margins of the 73rd Session of the UN General Assembly, also saw presentations by Danish Minister for Development Cooperation, Ulla Tørnæs; Minister for Health in the Republic of Tanzania, Ummy Mwalimu and Chief Executive Officer of the Defeat-NCD Partnership, Dr. Mukesh Kapila. In his well-received presentation, Dr. Harris described the Defeat-NCD Partnership as “a most welcomed and much-needed initiative” as the Caribbean region in particular continues to grapple with the increasing burden of NCDs and the escalating effects of climate change.

“The Caribbean comprises mostly small, open economies that are vulnerable to natural and manmade shocks – the most formidable of which appear to be our escalating problem of NCDs in the Caribbean and SIDS more broadly. Yet, most of our NCDs are of the preventable type, and so we welcome the advent of Defeat-NCDs to assist in reversing and preventing these negative outcomes for our people,” the prime minister said.

Prime Minister Harris further disclosed that there are effective public policies and programmes that can help turn the tide on this NCD epidemic.

“Measures to improve regulatory capacity for tobacco, alcohol, food and medicines are needed to reduce population risk levels and to increase access to treatment,” the prime minister added, while noting that there are only three fundamental determinants of health, which are genetics, the environment – both physical and social; and our life-choices.