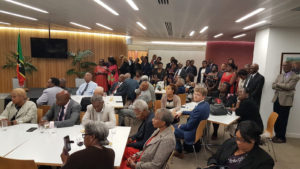 Since Sunday, 16th September, the St. Kitts and Nevis High Commission in London has been actively participating in commemorative celebrations to mark the 35th Anniversary of Independence of the Federation of St. Kitts and Nevis. These started with Services of Thanksgiving in Leeds and Leicester.
On Monday, 17th September, the High Commissioner hosted an Arts and Craft Exhibition as part of the celebration and to showcase the skills, talents and entrepreneurial spirit of the people of St. Kitts and Nevis. His Excellency Dr Kevin M. Isaac articulated that he hopes that this will be an ongoing activity to build awareness for our local artists and to introduce their craft to a newer and wider audience. The event was attended by people from different sectors, including diplomats through whom High Commissioner Isaac hope to build and expand the St. Kitts and Nevis Brand in the areas of cultural and trade diplomacy. 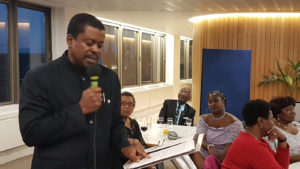 On September 18th, His Excellency Dr Isaac joined a large number of nationals at Westminster Abbey in London for an evening of prayer and thanksgiving, as the Federation’s flag flew above the Abbey. High Commissioner Isaac later hosted a dinner Reception at the Headquarters of the International Maritime Organization (IMO) for scores of nationals from cities across the United Kingdom such as Birmingham, Cardiff, Leeds, Leicester, London, Luton, Manchester, Nottingham, and Slough. The High Commission also hosted a rum-tasting event to showcase the diverse flavours of the islands’ growing rum industry. 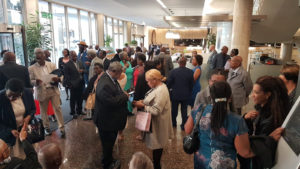 In his remarks, High Commissioner Isaac spoke of the positive and transformational strides St. Kitts and Nevis had made in the 35 years. He reminded nationals that “although we have a lot for which to be thankful, we also have a responsibility to continue to answer the call of destiny by fulfilling our national duty to the Federation”. High Commissioner Isaac acknowledged the hard work of his staff and praised his fellow nationals for their service, pride and patriotism.
The High Commissioner also expressed his gratitude to the various companies on St. Kitts and Nevis, including Caribelle Batik, Clifton Estate Rum, Brinley’s; and individuals such as Mr. Vaughn Anslyn, Dale Kelly and others whose works displayed their extraordinary talents either in their depiction of the scenic beauty of the Federation or by drawing attention to the products, entrepreneurial spirit and talent of the Federation.
Independence anniversary celebrations will continue across the UK and conclude with a Ball in November in Leeds.