The twin-island nation of St Kitts and Nevis is emerging as one of the Caribbean’s fastest rising tourism destinations. Three luxury hotel chains have committed to bringing new properties to the country in the near future. These include Ritz Carlton, Six Senses, and Ottley’s Plantation, and several other hotels on the islands are close to completion.

St Kitts and Nevis is emerging as one of the fastest growing tourism destinations. The tropical island nation in the Caribbean has already seen commitment from three leading hotel chains, who will bring luxury hotels to the country in the near future.

Several hotels and resorts in St Kitts and Nevis are due to be completed soon. Hotels under KOI, the Radisson and Ramada are scheduled to open to guests in 2018. The island nation already boasts hotels under the Park Hyatt, Six Senses and the Ritz-Carlton brands.

“We are the preferred destination for investments. The line-up of investment projects is impressive: Ritz Carlton; Six Senses; Ottleys Plantation is to have major investment coming shortly, and of course work at the Sea View Hotel in West Basseterre is picking up pace.”

“We are on our way to become the destination with the largest number of branded luxury hotel properties anywhere in the region. This is an incredible demonstration of confidence in our government, in our people and in the transparent way in which we do business here.”

The islands have seen a steady flow of new globally branded hotels over the years, with a Four Seasons hotel opening in 1991, a Marriott property in 2003 and a Park Hyatt in 2017. The Caribbean Galaxy Real Estate Corporation is also getting ready to start Phase II of its development in St. Kitts, which will include a new hotel and several upscale luxury villas. The company developed Heldons Estate Hotel and Residences at White Gate. 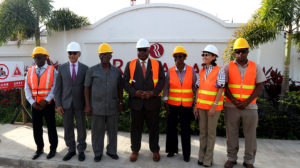 St Kitts and Nevis is a twin-island nation that sits in the Caribbean. The two islands are separated by a two-mile channel, and each boasts stunning natural landscapes including powder-soft white sand beaches, volcanic peaks, dense rainforests and an abundance of diverse wildlife. Popular attractions on the island include Brimstone Hill, a UNESCO World Heritage Site, St Kitts National Museum, Independence Square, Basseterre Cathedral, and Mount Liamuiga. 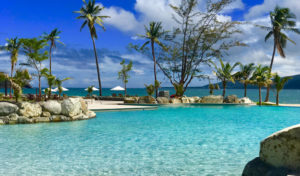 View from Villas at Park Hyatt-St.Kitts

Tourists can take part in fun activities on both lands and in the sea, such as scuba diving, snorkelling, fishing, golf, catamaran cruises, bird-watching and bike rides. They can also take tours of historical sites and attractions such as The Alexander Hamilton House and Cottle Church.