SKN Delegation with SKN students at the Dong Hwa University

Hon. Shawn Richards, deputy prime minister and minister of Education, Youth, Sports and Culture of the Federation of St. Kitts and Nevis, visited the International Cooperation and Development Fund (TaiwanICDF) on May 21, 2018. He was accompanied by Nevis Island Administration Junior Minister in the Premier’s Ministry with responsibility for Education, Library Services and Information Technology of Hon. Troy Liburd, Permanent Secretary of Ministry of Education Hon. William Hodge, Permanent Secretary of Ministry of Youth, Sports and Culture Mr. Stanley Knight, and Deputy Chair of Clarence Fitzroy Bryant College Board of Governors Mr. Damian Hughes.

The TaiwanICDF’s ongoing projects in the country include the St. Kitts and Nevis Enhancing Agricultural Adaptive Capacity to Climate Variability Project and the Capacity Building Project for the Prevention and Control of Chronic Kidney Disease in St. Kitts and Nevis. Under the scheme of the Taiwan Youth Overseas Service program, the TaiwanICDF also dispatches servicemen to assist with the implementation of projects. 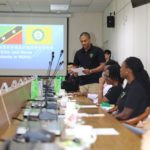 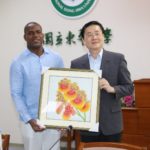 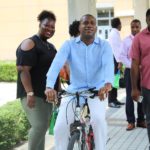 To date, a total of 120 participants from St. Kitts and Nevis have received training from the TaiwanICDF’s professional workshops, and a total of 38 students from the country have received International Higher Education Scholarships and studied in Taiwan.

The SKN  delegation also visited the National Dong Hwa University. President Dr. Han-Chieh Chao and other school officials hosted the DPM Richards led delegation and gave an overview of the operations of the University which has a student population of over 10,000 including students from the federation  .

There are ten students from the Federation studying at this University. Teshanna A Warde, one of the students, is graduating this year.

A welcome ceremony was held for the visiting delegation and welcome  remarks were given by the University President during which he noted that the school is 24 years old but is ranked 17th amongst 163 emerging Universities.  DPM Richards and  Jr. Minister Liburd also gave remarks . Ms Teshanna was congratulated and the University was commended for its ranking and for helping to educate our students. Students were also praised for immersing themselves in their studies, the culture, extra curricular activities, being good ambassadors, etc.

The President informed us that scholarships are available for those wishing to pursue advanced studies.

Stephen T. Richards one of the students also brought remarks on behalf of the students. The President used the opportunity to  highlight the fact that  a number of awards had been won by SKN students in various. Jamella Fraser was singled out for her top performance within her school of study. All the students present also were given an opportunity to speak about their experience thus far and it was all positive.