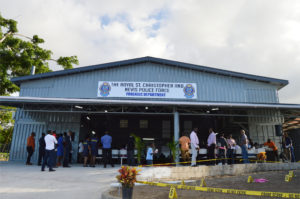 BASSETERRE, St. Kitts, May 1, 2018 (Press Unit in the Office of the Prime Minister) – The tiny twin island Federation of St. Kitts and Nevis, under the leadership of the Team Unity Government, continues to punch above its weight in a number of areas – from economic performance to improvements in information and communication technology (ICT) – particularly when measured against the accomplishments of much larger nations regionally and internationally.

“In every area in which we engage, we are being compared [and] not just with another small island, but we are being compared with the rest of the world, and so we have to think big,” said Prime Minister Dr. the Honourable Timothy Harris at Friday’s (April 27) ceremony to commission the new forensic laboratory.

On the economic front, St. Kitts and Nevis is the only country in the Organization of Eastern Caribbean States (OECS) with a near five percent projected growth in 2018, driven largely in part by a robust construction sector and a booming tourism industry. 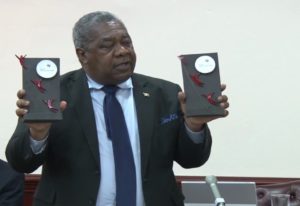 Also noteworthy is that St. Kitts and Nevis’ Citizenship by Investment Programme, the oldest and most trusted programme in the industry, has racked up several accolades in recent times that have solidified its position as the platinum brand of the industry.

Prime Minister Harris, who recently wrapped up a tour of the United Arab Emirates (UAE) and Hong Kong where he successfully promoted the country’s CBI programme, stated, “From my interaction with over two hundred international marketing agents and their support teams and developers, I was assured that St. Kitts and Nevis’ CBI programme is considered in the market place as the most reliable and it is now the most sought after programme.”

Additionally, the twin island federation continues to outpace its OECS counterparts in terms of ICT development. In the 2017 ICT Development Index, produced by the International Telecommunications Union (ITU), St. Kitts and Nevis ranked 37 out of 176 countries worldwide as it relates to developments in information and communication technology.

Prime Minister Harris further noted that he was filled with a sense of pride in knowing that St. Kitts and Nevis was evaluated as the least corrupt jurisdiction in the Caribbean region. The World Justice Project (WJP) Rule of Law Index 2017-2018 ranked the twin island nation 25th out of a total of 113 countries in the world.

Noting that the continued growth and prosperity of the nation hinge on the safety and security of the people, the Team Unity Administration has made substantial investments in the Ministry of National Security including the opening of the brand new forensic laboratory in Tabernacle.

“The peace, order, safety and security and good governance are responsibilities which my Cabinet takes seriously,” Dr. Harris stated, adding that his administration has provided year-over-year increases in budgetary support to the Ministry of National Security in 2016, 2017 and 2018.