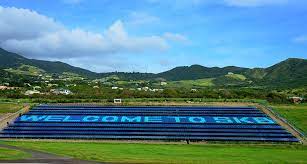 Basseterre, St. Kitts, November 02, 2021 (SKNIS): Energy security plays a critical role in the development of Small Island Developing States (SIDS) according to the Department of Environment at the CARICOM Secretariat. Deputy Prime Minister and Minister of Public Infrastructure, Post, and Urban Development, the Hon. Shawn Richards in his address to commemorate November as Energy month spoke of the plans of his ministry to improve and revamp energy supply across the Federation.

“The theme for this year is “from dependence to resilience: “fueling” our recovery with sustainable energy”. This theme seeks to highlight the significant role that energy must play in the attainment of sustainable development in the region and in our post-COVID-19 economic recovery, in particular. It says that to do so, the region’s energy supply must transition from dependence on imported fossil fuel to the use of indigenous resources. We must ensure that the resilience of the energy sector to climate change is enhanced, while, at the same time, exploring and exploiting opportunities for climate abatement. If this strategy is implemented, our energy supplies will become secure in pricing and availability, and efficiently delivered to consumers through resilient infrastructures and operations. This will lead to a future of greater economic growth, social advancement, and environmental preservation,” said Deputy Prime Minister Richards.

Deputy Prime Minister Richards went on to outline a number of projects being done by the Ministry of Public Infrastructure to improve energy security within the Federation, namely: a 33 MW solar farm with 44 MW of battery storage in the Basseterre valley, an ongoing project to replace all of the existing street lamps and playfields lighting on St. Kitts and Nevis, with LED lamps and the construction of partially solar-powered desalination plants on St. Kitts and on Nevis by the United Arab Emirates to list a few.

Notably, the Ministry of Public Infrastructure sees the development of our human resources, in the energy sector, through training as a critical component in the effort to strengthen the Federation’s energy security. Deputy Prime Minister Richards always outlined a number of activities planned for Energy Month 2021, encompassing community participation and youth involvement.

“A number of activities are planned in observance of Energy Month: A door decoration competition among primary schools and a science competition among secondary schools are already underway… On Monday, November 29, the youth parliamentarians will debate the Federation’s energy policy and on Tuesday, November 30, an energy fair will be broadcast on ZIZ television and on social media. Also, on the agenda are a yoga session at the Flow grounds at 4:30 PM on Monday, November 1; appearances on SKELEC’s PowerTalk programme on ZIZ Radio on Wednesdays, November 3 and 17; an appearance on ZIZ’s totally for Kids programme on Saturday, November 13; and a health walk on Saturday, November 20,” said Deputy Prime Minister Richards.