Deputy chair of the Planning Committee for the 25th Anniversary Celebrations, Antonio Maynard, said that Dr. the Hon Timothy Harris, who was born into humble circumstances earned his way into the upper echelons of politics, academia and society. Dr. Harris was elected to Parliament in 1993 and won his seat five more consecutive times. In 2015, he became St. Kitts and Nevis’ third Prime Minister. 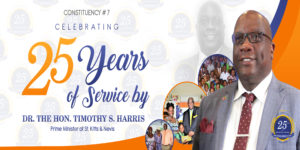 Maynard chaired a five-person panel at a press conference announcing anniversary plans, which he described to the audience, the country and thousands who followed the event by radio, television and on the internet. Maynard said that while Dr. Harris was serving his constituency for 25 uninterrupted years, it was “certainly a cause to celebrate and to honour him. Dr. Harris is a humble man – in fact he is a great man who has risen to higher heights based on hard work and determination to succeed.”

The committee, headed by Anthony Ross, QC, was established in September. He was charged with the responsibility to plan and oversee the activities to commemorate the milestone. Others on the conference panel were Mrs. Elreter Simpson-Browne, William Phillip, Manasses Huggins and Ms. Trevlyn Stapleton.

“For me it is indeed an awesome privilege to be able to congratulate our beloved Prime Minister and Parliamentary representative for Constituency Number Seven, Dr. the Honourable Timothy Harris,” said Mrs. Simpson Browne. “Dr. Harris has been an inspiration and motivation and a source of encouragement for all of us in Constituency Number Seven and the country at large.”

According to Mrs. Simpson-Browne, activities begin Sunday, Nov. 11 with a church service at the House of Deliverance New Testament Church of God on Main Street in Tabernacle Village at 10:00 a.m. A second church service will be on Sunday, November 18 at the Antioch Baptist Church in St. Johnson Village at 9:30 a.m., while a third service will be at the Liberty New Testament Church in Molineux on Sunday, November 25 at 10:00 a.m.

“On Dec. 2 at 10:00 a.m. our celebratory event will conclude with worship at The Pentecostal Church of God, Saddlers Village,” Mrs. Simpson-Browne said. “I therefore take this opportunity to invite all his (Prime Minister Harris’) constituents and well-wishers to come and worship with us. However, if you are unable to be there, you will be able to see the services on ZIZ TV at 4:00 p.m. each Sunday.”

According to Mrs. Simpson-Browne, keys for two custom-designed, fully furnished two bedroom houses will be presented, one on Friday, November 16 at Molineux Extension, and another on Wednesday, November 28 at Catholic Street Housing Development in Molineux.

On Thursday, November 29, which is the actual anniversary when Dr. Harris was first elected to Parliament, a Town Hall and Panel Discussion under the theme ‘The Journey’ reflecting on his journey from 1993 to 2018 will be held at 7:30 p.m., in the Estridge Primary School Hall. At the same forum, 25 well-deserving people will receive awards.

“The final event I would like to mention is the Gospel concert on Sunday, November 25 from 7:00 p.m. to 11:00 p.m. in Tabernacle at the Edgar T. Morris School Ground,” Mrs. Simpson Browne said. “This event is going to be big and let me also add, free of charge. We will be featuring a host of local church groups and individual artists, but the highlight for the night will be a very special international artist with a powerful testimony. I don’t think that anybody would want to miss this event.”