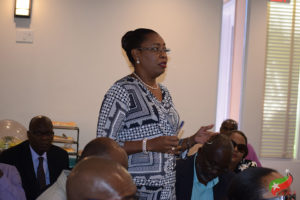 BASSETERRE, St. Kitts, November 28, 2017 (Press Unit in the Office of the Prime Minister) – Representatives of the private and public sector, as well as key economic and social partners in St. Kitts and Nevis were today, Tuesday, 28th November, 2017 given the opportunity to contribute to and help shape the 2018 Budget during a Consultative Dialogue held at the Ocean Terrace Inn (OTI) Conference Room.

Also present were Financial Secretary, Mrs. Hilary Hazel and other officials from the Ministry of Finance; President of the Chamber of Industry and Commerce, Mr. José Rosa and senior Government officials.

In giving an update on the country’s current economic position, Prime Minister Harris stated that the economy of St. Kitts and Nevis, relative to those of its neighbours, remains strong.

The Finance Minister said, “In 2015 and in 2016, we presented surplus budgets to our country and we expect in 2017, notwithstanding the significant damage [caused by Hurricanes Irma and Maria], that when the figures are finalized we would at the very least present a balanced budget or better. We have over the last three years nigh of this administration shown surplus on the recurrent account, overall account [and] primary account, and we expect that will continue for 2018.”

Dr. Harris added that, “For us, these are the indicators which the international community uses to assess the fiscal management of the country, and to the extent that we have consistently been able to record audited surpluses on these accounts is an indication of the sound fiscal management which undergirds what we do.”

The Honourable Prime Minister also pointed out that the per capita income for St. Kitts and Nevis grew from US $15,739 in 2014, when it was fourth highest in the region, to US $16,978 in 2016, which is now second highest in region.

“The public debt, which traumatized us post-2011, continues its downward trajectory, and in 2014 the public debt stood at 77.6 percent. At the end of 2016, our debt-to-GDP ratio was at 64.5 percent – the lowest among independent countries in the OECS and CARICOM,” Prime Minister Harris disclosed, noting that, “We are hoping that by year end, we will be the first country in the region to achieve the international ratio of 60 percent debt-to-GDP.”

He added, “For the Chamber, it is important that we always maintain these open channels of communication to discuss different aspects of the Federation that impact the Government, the private sector, and the community at large.”

Mr. Rosa also outlined a number of areas the Chamber feels should be taken into consideration by the Government in 2018 that can redound to overall economic growth.

These include the expected impact of the Citizenship by Investment (CBI) Programme on the growth of the economy; plans to improve the country’s ranking in the World Bank’s Ease to Doing Business Report; tourism growth expectation and how the private sector can support that growth, and further initiatives to encourage and promote small business development in the Federation.