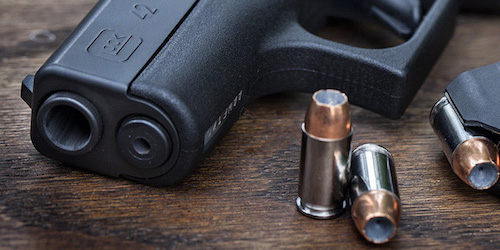 FILE PHOTO
Tweet
Basseterre, St. Kitts, August 20, 2017 (RSCNPF): A combined team of members from the Special Services Unit (SSU) and members of the St. Kitts Nevis Defence Force on an Surveillance Mission as part of  “Operation  Mid Sweep” on Saturdaynight (August 19) netted two (2) illegal firearms. Seized  were, one (1) Glock 23 pistol with twenty (20) .40 rounds of ammunition and one (1) Ruger .40 pistol with eleven (11) rounds of ammunition.
The discovery and seizure was a result of a search carried out on two (2) vehicles in the Newton Ground area.
Four persons were taken into custody, including a Customs Officer.
Deputy Commisioner of Police Mr. Hilroy Brandy, commenting on the seizure said, “I want to commend the team on this seizure, the Team Leader saw something out of the ordinary, reflected and relied on his training and took the appropriate actions. He followed his intuition, and it reaped dividends…..Two (2) more illegal firearms are off the streets.”
This seizure brings the total number of illegal firearms seized year to date in 2017 to thirty-seven (37), one (1) more than the total seized in 2016.
Seven (7) illegal firearms have now been seized by the Police to date in August. The last seizure was on Saturday (August 05) when five (5) illegal firearms were seized in two operations.
Commissioner of Police Mr. Ian M. Queeley noted, “this seizure underscores the point that our efforts to rid our communities of illegal guns continue to be a challenge, and our team (Police and Defence Force) is committed to ensuring Citizen Safety in St. Kitts and Nevis. This seizure coming on the heels of those about two (2) weeks ago will serve as a motivator for our teams. It will also reinforce that by staying focused, and vigilant, our efforts will continue to bear fruit.” Commissioner Queeley added, “to the team I say a job well done.”
The Commissioner added, “I urge all citizens to join us in our efforts to ensure safe communities, I encourage you to come forward and share any information they may have with regards to crime and criminal activity,” and encouraged Citizens to do so by calling any Police Station, Crime Stoppers at 1-800-8477 or by using the SKN Crime Reporter App on a Smartphone.
Tweet