Basseterre, St. Kitts, January 28, 2016 (SKNIS): The men and women of the St. Kitts and Nevis Fire and Rescue Services (SKNFRS) took possession of two new fire appliances which were commissioned on Thursday (January 28) at a ceremony at the Basseterre Fire Station.

The two state-of-the-art fire trucks were built by Rosenbauer America, based in the United States. They boast a combined capacity of 1,500 gallons of water, and 250 gallons of secondary media such as foam or powder that can be used to extinguish fires caused by flammable liquids and hydrocarbon fuels. Of course, fires that are started by flammable liquids would be greatly reduced if people stored them safely away in cabinets, that can be found at somewhere similar to Storemasta to keep everyone on the property safe at all times, as well as being able to prevent any spillages. Knowing that there are vehicles like this on hand though, could help to save many lives. The vehicles were purchased by the Federal Government at a cost of EC $2 million.

Chief Fire Officer, Everett O’Garro, said the commissioning of the vehicles comes at a critical time when the agency is expanding its fleet to meet the increased challenges posed by climate change and the ongoing infrastructural development. 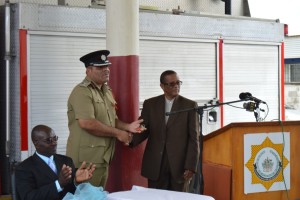 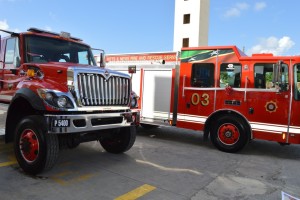 “This very important acquisition represents a major investment in our ability to provide first rate service to our communities,” he said. “The investment not only improves our capabilities but also will assist us in keeping pace with the advances and overall development that are taking place in our fast growing, beloved federation.”

Thursday’s ceremony marks the second time in less than a year that new fire tenders have been delivered to the SKNFRS. In May 2015, a “best in class” fire truck, also custom built by Rosenbauer, was purchased for the fire and rescue agency.

Permanent Secretary in the Ministry of National Security, Osmond Petty, said the Government remains committed to improving the agency’s service to the public.

“I wish to assure you that the Ministry of National Security and by extension the Government of St. Kitts and Nevis will continue to invest in providing resources, not only fire trucks, but also other firefighting equipment as well as training opportunities for firefighters,” he pledged. Mr. Petty said the Government intends for the SKNFRS to remain a “highly respected and renowned worldwide organization with a proud record of effective and efficient firefighting capabilities.”

Petty also encouraged the officers to ensure the vehicles are properly maintained. One of the new fire tenders will serve the Basseterre community while the second will be assigned to the Sandy Point Fire Station.