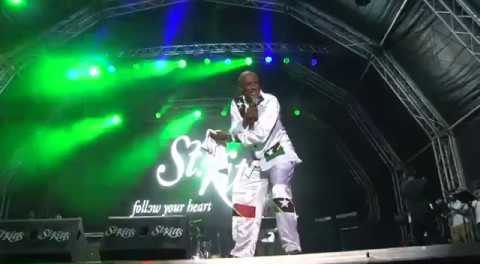 The St. Kitts Music Festival opened with a bang Thursday evening with an epic soca fete many are describing as the best opening night of the festival’s 21-year history.

The main feature of the night spotlighted a band clash, featuring the reigning road march champions, the Grand Masters Band, and the former champions, the Small Axe Band, ending in a stalemate 4 a.m. Friday morning.

The band clash got underway after a night of soca performances by top local and regional acts. The evening began with a calypso extravaganza, featuring the likes of King Dis N Dat, Calypso Craig and Mighty Chalkdust out of Trinidad and Tobago, all in front of a disappointingly small crowd in the first hour of the night.

However, the crowd grew steadily throughout the evening when the local soca acts took the stage.

Rucas HE dropped an energetic performance that included him performing all his solo hits that have been released during the past few years, as well as the Caribbean hit “Palance.” He also teased with the Grand Masters’ “wuk u shift” ahead of the band clash.

AkaiiuSweet also gave an admirable performance as he came out draped in a gold blazer and brought Mr. Bagnal on stage to perform their carnival hit “Bruk it Set it.”

Iconic soca band out of Barbados Square One were introduced during a heavy drizzle, but implored the audience to come and jam in the rain and the fans obliged.

The band’s performance did not disappoint, as it put down a performance it has come to be known for, with lead vocalist Alisson Hinds. The band rendered some of their iconic hits of the past 30 years.

Square One’s performance was followed by Ricardo Drue, who did a short segment before he introduced Teddyson John, as well as Voice and Lyrical, a foursome that put on a nearly two-hour energetic stint that was in turn ended by Ricardo Drue.

That foursome was then replaced by another, as the four-member group Ultimate Rejects performed many different versions of their worldwide hit “Full Extreme.” That performance was then followed by the band clash. Each band performed four 6-minute rounds as they aimed to capture the first-ever Music Festival Band clash champions.

However, after the performances the competition ended in a tie as a winner could not be chosen.

The music festival will continue this evening with performances expected from the like of Movado, Shabba Ranks and Jah Cure.