Basseterre, St.Kitts (June 1st, 2018):-The Leadership of the St.Kitts-Nevis-Anguilla NATIONAL Bank Group including the Board of Directors led by Chairman Alexis Nisbett have come in for high praises from shareholders . The commendation from the shareholders came at the Group’s 47th Annual General Meeting held on Thursday May 31st at the Park Hyatt Hotel-St.Kitts. The Meeting drew the largest group of shareholders in recent years with almost 400 persons present at the meeting.

Chairman Alexis Nisbett gave an outstanding account of the Bank Group’s financial year and highlights. The young highly intelligent and knowledgeable Nisbett gave in detail, a laudable account of the group’s performance for 2017. The almost 90 minute presentation detailed the highs and lows of the Banks year in review and also gave shareholders an insight into the operations of the institution and the work of the the board of directors and the management and staff . Nisbett  succeded Howard MchEcharane who led the organisation for  years from 2015 to 2017. McChecrane along with Nisbett and the board of the Group all came in for lofty commendations.

Chairman of the Board, Mr. Alexis Nisbett stated , “The Group’s most recent performance is a testimony to the commitment, loyalty and confidence of our shareholders and customers as well as the hard work and dedication of staff.  The Group’s remarkably good performance over its 47-year history is also indicative of its strength and stability as demonstrated by the deposits, shareholder’s equity and reserves recorded.” 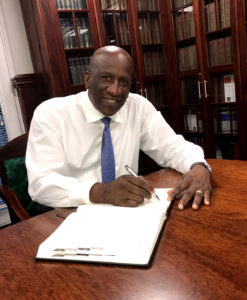 Chief Executive Officer (Ag.)  Mr Donald Thompson was also credited for his sturdy leadership of the Bank. He commented on the Bank’s performance and echoed the sentiments of the

Chairman and added that the Group recorded net income of $39.5 million at the end of June 2017, which represents a 39.0% or $11.1 million increase when compared with $28.4 million in 2016.  The Bank saw increases in Total Assets from the previous year as well as increases in Earnings Per Share. This is significant as the bank saw the highest earnings per share when compared with the last four years.  Overall, the Group recorded improvements in most of the key performance ratios. For the 2016-2017 financial year, the Group has so far paid an interim dividend of $6.75 million or $0.05 per share in December 2017.

The AGM saw the election of two new members to the board to fill vancancies left by the retirement of Theodore Hobson QC and the exit of for Former Chairman MchEchrane. Accountant Frank Maitland and Special Advisor to the NIA Lorna Hunkins were duly elected and will fill the complete the boards full complement of members. Directors Analdo Bailey, Wallis Wilkin and Elreter Simpson-Browne were all retired by rotation but were all re-elected to continue their service as board members.

St.Kitts-Nevis Prime Minister Dr. The Hon. Timothy Harris hailed the success of the Bank and also hailed the leadership of the institution.

Prime Minister Harris  said that, “The National Bank Group is reporting net income of over $39.5 million for 2017 – far in excess of the reported $28.4 million in 2016.  Net income is up 38 percent over the previous year, and the Bank’s asset base grew by over $100 million from $3.7 billion in 2016 to EC $3.8 billion in 2017. The  leadership of the institution including the Board, the Management and the staff should be commended for this performance.” 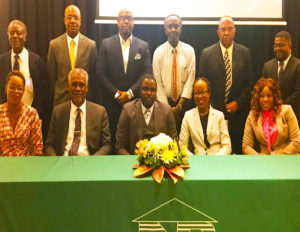