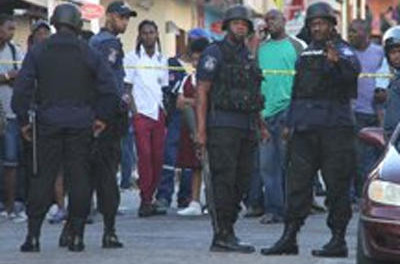 Elizabeth Castillo, mother of Richard Soleyn who was shot dead yesterday, sheds a tear while speaking to the media. PHOTO: MICHEAL BRUCE

Among the seven, five were murdered and two were killed by the police.

Three of the murders took place in Laventille, while the other two killings occurred in Penal and Vega de Oropouche, Sangre Grande.

The Laventille murders took place despite the announcement by Prime Minister Dr Keith Rowley on Friday that soldiers would immediately return to the streets to weed out criminal elements and also become a permanent fixture in areas such as Laventille, Enterprise, Diego Martin, Tobago, and other parts of T&T.

Rowley’s call came shortly after Thursday’s brazen murders of schoolboys De-neilson Smith, 17, and Mark Richards, 16, on Picton Road, Laventille, while on their way home from school.

An 81-year-old pensioner, Mosley Phillip, who is said to be the father of one of the men allegedly involved in the shooting of the two secondary school teens, was gunned down on Friday night in Laventille.

Police said they believed the killing was a reprisal for the murders of the schoolboys.

Around 2.10 pm yesterday, several police officers and soldiers were stationed close to Sogren Trace, Laventille, not too far from where Phillip was shot a few times in the chest. According to police reports, Phillip’s wife, Cynthia, was washing dishes on Friday night when the water supply stopped suddenly.

She woke him up to do a routine check, but he was approached by gunmen who shot him several times about the body. The couple’s couch was also set on fire and police discovered the remains of two molotov cocktails at the scene. Police are working on the theory that Phillip’s killers attempted to torch the house.

No one was at home yesterday when the T&T Guardian visited. There were broken pieces of glass from the three window panes and bullet holes in the front door.

A neighbour, however, said Phillip and his wife were quiet people who were never in trouble with anyone. Residents claimed the son was part of a gang.

Lower down at Clifton Hill, east Port-of-Spain, on Friday night, police on patrol heard gunshots and upon investigation found the bloody body of a young man. Police officers attached to the Besson Street Police Station were unable to identify the man up to late yesterday.

Across at Poinsettia Extension, Morvant, 28-year-old PH driver Richard Soleyn was shot to death around 6 am yesterday while he hid under a heap of clothes. Relatives were comforting each other metres from where he was shot.

Police said Soleyn and his common-law wife were at home sleeping when three gunmen entered the home by breaking down a back door. The spouse, Natalie Phillip, and three children—ages five, three and one—were unhurt.

Soleyn’s mother, Elizabeth Castillo, holding on to her only son’s wallet, said he was loving and quiet. She said his children adored him more than their mother. According to Castillo, her son worked hard to provide for his family. The children saw their father’s dead body, she said.

Castillo questioned who would want to hurt Soleyn and why.

Castillo said, “I was home and heard the shots. Normally when I hear shots around the neighbourhood I would call him but when I called, I got no answer. The shots sounded so close.”

The murder spree was not contained to the capital city.

In south Trinidad, police reports were that early yesterday morning, 39-year-old produce vendor Steve Stephenson of Penal Rock Road was selling vegetables near his home when gunmen approached and shot him several times. Stephenson was rushed to the Siparia Health Centre but was pronounced dead on arrival.

Police are investigating the motive behind this murder.