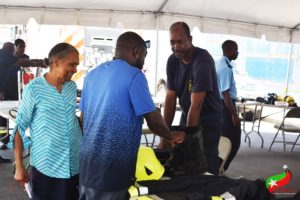 Basseterre, St. Kitts, May 01, 2018 (SKNIS): Scores of residents in St. Kitts got to interact directly with several members of the St. Kitts and Nevis Fire and Rescue Services and learnt more about some of the equipment they use during an Open Day on Tuesday (May 01).

The event was staged on Bank Street and displays were mounted with tools such as the jaws of life and an accompanying cutter and spreader, which are used to help extricate persons from severely damaged vehicles; a rescue tripod and basket that allow a person to be removed safely from holes; a fire blanket kit; fireman protective clothing; service uniform, and more. Videos featuring fire-fighters in action were also being shown on a television monitor, while the newest 4×4 Rosenbauer Panther Appliance drew a large interest from passersby. Some persons were able to climb into the fire truck while a few were allowed to operate the equipment via the controls.

“We want to build a relationship with the community so they can be aware of what we do on a daily basis,” said Fire Sub-Station Officer (FSSO), Lesroy Caines, noting that every day fire fighters make personal sacrifices to safeguard the life and property of residents and visitors.

The response from the public was positive as many persons moved to the different display stalls asking questions and collecting promotional literature.

“It has been splendid,” FSSO Caines said. “We have seen different persons coming around; they are quite fascinated by our different tools and equipment and also the school children passing by on their lunch break, they too were very fascinated.” 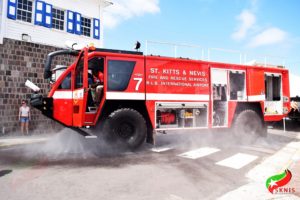 The Open Day was one event in a week of activities that runs from April 29 to May 06. The first event was a church service at the Calvary Baptist Tabernacle in St. Kitts and Shiloh Baptist Church in Nevis on Sunday. A cricket competition will be held in Nevis on Wednesday and a drill competition will be held on the Basseterre Bay Road on Friday, May 04. On Saturday, May 05, there is a Sports Day at the Newtown Playing Field and Sunday, May 06, a beach party will be staged.