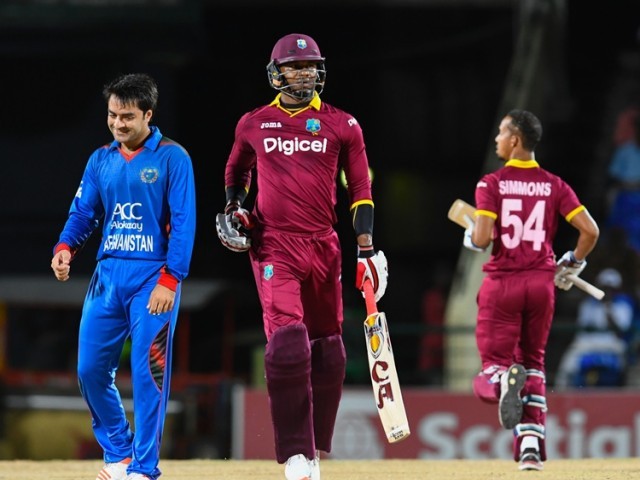 BASSETERRE, SAINT KITTS AND NEVIS: Marlon Samuels was at his most imperious with an unbeaten 89 to guide the West Indies to a seven-wicket win over Afghanistan in the final fixture of the three-match T20I series at Warner Park in St Kitts on Monday.

Replying to the tourists’  total of 146 for six, the right-hander’s highest-ever T20I innings took the home side to the target with four balls to spare and completed a 3-0 series sweep.

Samuels’ innings occupied 66 deliveries and was embellished with three sixes and nine fours.

He deservedly won both the “Man of the Match” and “Man of the Series” awards in a format of the game in which he has excelled in the latter stage of his long international career.

“I know my role in this team and it was important to stay out there and ensure we got the target,” he said after victory was completed in partnership with Jason Mohammed. “Partnerships are important to any run chase and it was good that a couple of us worked together effectively.”

Afghanistan, who now prepare to take on the West Indies in three One-Day Internationals in St Lucia starting on Friday, were left to rue a costly miss by their most experienced player that allowed Samuels to be the match-winner.

Having top scored with 38 after his team chose to bat first, Mohammad Nabi dropped a sharp caught-and-bowled chance offered by the batsman when he was just on 40. Thereafter his batting was flawless and not even the belated introduction of the main bowling threat, leg-spinner Rashid Khan, could contain him.

Samuels featured in half-century partnerships with opening batsman Evin Lewis and Mohammed, whose unbeaten 23 ensured there was no middle-order wobble that could have opened the door to a consolation win for the visitors.

“It was important for us to complete the sweep because if we hadn’t done so there would have been all sorts of things said about our team,” said West Indies captain Carlos Brathwaite. “They may be minnows in international cricket but we respect them and there was no way we were going to take them for granted.”

Earlier, Nabi’s innings and 35 from Noor Ali Zadran led Afghanistan’s batting effort against a home side that appeared to be lacking in intensity with the series already wrapped up following comfortable wins in the first two matches at the same venue.

Wicketkeeper-batsman Shafiqullah Shafaq chipped in with 25 to ensure West Indies were left with a challenging target.

Kesrick Williams was again the most successful of the home bowlers, finishing with three for 34 to lift his wicket tally in the series to eight. There was a bit of concern though at the end of his spell as he appeared to be suffering the discomfort of a back injury when he bowled Shafiqullah with the final ball of his four-over allotment.

“This was very disappointing but it is still a step in the right direction for us to be playing teams like the West Indies,” said Afghanistan captain Asghar Stanikzai. “We are hopeful that this experience will serve us well for the one-day matches to come.”