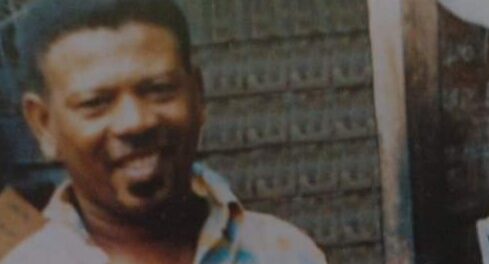 Samuel Jones was born in San Pedro de Macoris in the Dominican Republic, on Dec. 30, 1926, to a Nevisian mother, and an East Indian father named Atavali, who had come from Calcutta (now Kolkota) India, to work as an indentured servant in the sugarcane fields on St. Kitts. Sent to Nevis from the Dominican Republic, Jones was raised by his maternal aunt, Florence ‘Auntie Florrie’ Wilkerson (the famous ‘pull-pull’ lady), in Low Street, Charlestown, on the spot now occupied by Happy Endings. He entered business in his 30’s, and made an indelible mark on several fronts.
Jones loved pictures. He was first an itinerant photographer, scooting around Nevis on a motorcycle, and then a cinema operator. In that regard, he followed in the footsteps of German-born Emil Gosliben, who operated a cinema at the site of Food Centre Cash & Carry, and Nevisians Charlie Hobson and Brother Phillip (Gilbert Phillip), as entrepreneurs who brought Nevisians cinematic pleasure. Hobson operated out of the St. Paul’s Anglican School Room, while Phillip became the first Nevisian to build a cinema, The Carib Cinema – the building which now houses the New Testament Church of God on Bath Road. However, while his competitors kept Movies or ‘Show’ at a single location, Jones took the ‘Show’ on the road, utilising multiple venues across the island: the Roman Catholic School Room in Craddock Road, the Austin Hotel on the waterfront, the Old Brown Hill School, St. George’s Anglican School Room, St. Thomas’ Anglican School, and at Bose Warner’s buildings in Parsha Gate, Brickkiln and Camps Village. Film was rented from Vernon Mallalieu, who operated the Apollo Cinema on St. Kitts, who had procured them from Warner Bros. of Trinidad. Jones pushed his primitive equipment around to the Charlestown venues in a trolley. Among his young helpers were: Desmond Sargeant, Kirbie ‘Spanky’ Frith, Wellington Parris, Spencer ‘Melo’ Lawrence and Calvin ‘Pot-a-Rice’ Ward.
Jones was a social creature and had many children, among them singer/composer Earl Boncamper, who resides in Finland, and who coined the name of our summer festival, CULTURAMA; Sherry Herbert who works at Black Enterprise in New York, and Cecil Dore, who lives on Nevis.
Photo Credits: Earl Boncamper, Cecil Dore, Sherry Herbert