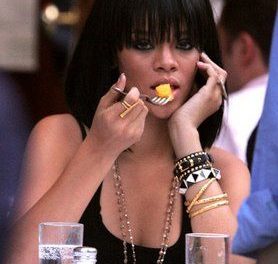 (Guyana Guardian) – Barbadian-born singer, songwriter, and actress, Rihanna, whose mother is Guyanese by birth, maintains that Guyanese food, mainly cook-up rice and pepper pot are the meals that are most favored by herself and family.
She made the revelation a few months back in a list of interview questions published by Elle, and reiterated the same position in subsequent interviews. (See Elle magazine link here)
Elle is one of the most influential celebrity lifestyle magazines which attract a readership of more than 70 million people.
Rihanna was asked the question by celebrity fashion designer Zac Posen, and which was listed at number six of the fifteen published questions that Rihanna was asked by other celebrities, along with her answers.
Pepper-pot is an Amerindian dish that is almost native to Guyana, and is one of the country’s national dish.
It is most commonly prepared by the wider population around Christmas time, where it serves as the main dish for all, and is made by intermixing a blend of Guyanese casareep (a prepared extract from cassava juice), and large chunks of meat along with various herbs and spices to achieve flavour.
The meal can take several days to prepare depending on the meat portions used, in addition to your desired taste and texture; and can be served unspoiled for periods longer than a week outside of the refrigerator, by simply reheating it daily.
It is mostly used with bread, but is also used as a stew when served with rice.
Cook-up rice is also another major choice on the Guyanese food menu and take many forms; but are based on the same principle of using coconut milk, seasoning, peas, and meat, which are all cooked together, but in a systematic way.
It is said to be a meal that was first introduced to Guyana and the wider Caribbean by African slaves, but is now a major part of the Guyanese identity, since it has evolved into a meal that is common among every local household regardless of race or creed.
However, the Grammy-winning superstar did not say in any of the interviews, why the two Guyanese meals are favoured by herself and family.