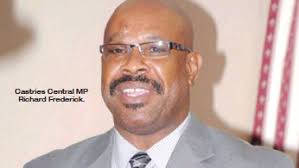 (St.Lucia Times) Former Castries Central MP, Richard Frederick, has denied making a deal with Castries North MP, Stephenson King, although both men have declared that they will be participating in the July 26 general elections as independent candidates.

Frederick will be seeking to unseat the incumbent, Sarah Flood-Beaubrun, in Castries Central.

“I Richard Frederick, have not spoken to Stephenson King in over four years certainly – neither on the phone nor in person,” the former Housing Minister declared during an appearance Monday night on the Choice Television programme – SoLucians.

“I have not spoken to him, he has not been in my company, we have discussed absolutely nothing with respect to his independent candidacy and mine,” he explained.

And Frederick asserted that were he to respond to every issue, the salient matters would be lost.

“Sometimes one needs to remain on track to ensure that people are seized of the relevant information to make that decision, but I can say to Saint Lucians, I have made no deal with Stephenson King,” he stated.

“But there are two sayings: ‘Great minds think alike’ and ‘The enemy of my enemy is my friend’,” Frederick noted, while asserting that there’s a burning desire in this country which needs to breathe some fresh political air.

In in regard to the July 26 general elections, he stated that judgement day is near.