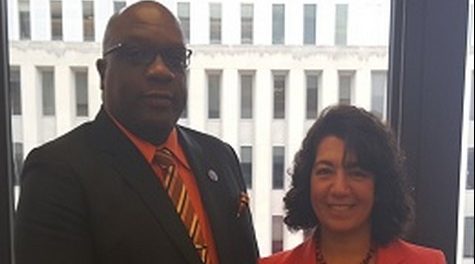 BASSETERRE, ST. KITTS, MAY 4TH, 2017 (PRESS SEC) – A team from the International Monetary Fund (IMF) commended the Government yesterday, Wednesday, May 3rd, 2017, on its efforts to strengthen St. Kitts and Nevis’ Citizenship-by-Investment (CBI) program, the oldest of its kind in the world.

“I would like to commend the government for strengthening the processes, particularly the due diligence processes,” Ms. Inci Otker, the IMF mission chief on the 2017 Article Four (IV) Consultation to St. Kitts and Nevis, told the Prime Minister and Minister of Finance, Dr. the Honourable Timothy Harris, and members of the Federal Cabinet yesterday.

Ms. Otker characterized the strengthening of the due diligence processes as a “very welcome” step and noted that the reforms have helped to “reduce integrity/security risks, preserve the program’s credibility and reputation, and avoid a race to the bottom.”

The IMF official further stated that the Cabinet’s consideration of CBI options beyond real estate was also “very welcome.”  The Cabinet considers CBI options such as alternative energy, entertainment, entrepreneurship, heritage, and infrastructure, as well as investment in a growth and resilience fund.

The IMF team is visiting St. Kitts and Nevis as part of the routine Article IV Consultation to the country.

According to the IMF’s website, the usually annual consultation is known as an “Article IV consultation” because it is required by Article IV of the IMF’s Articles of Agreement.