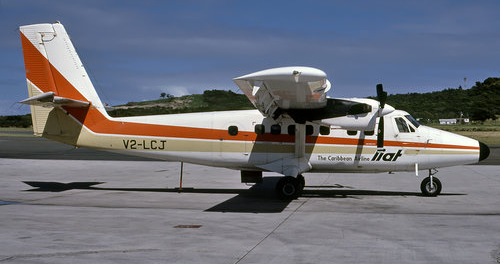 LIAT Flight 319 departed from Hewanorra International Airport in St. Lucia, en route to the E. T. Joshua Airport (then called the Arnos Vale airport) in St. Vincent and the Grenadines. On attempting to land at its destination the plane encountered difficulties due to a rainstorm. Two initial attempts were made to land the plane. The plane is believed to have crashed into the sea and sunk in water some 6,000 feet (1,800 m) deep during its third landing attempt. Neither the bodies of the passengers and crew, nor the wreckage were discovered.
Tweet

Today marks exactly twenty-five (34) years since Vincentians at home and abroad were plunged into their most horrifically tragic air disaster in the history of commercial air flight in St Vincent and the Grenadines.

It was on August 3, 1986, that LIAT flight 319 disappeared while attempting to land at the Arnos Vale airport (now renamed The ET Joshua Airport). While all incidents that result in loss of lives are tragic, the untimely deaths of the thirteen souls on board were particularly stinging to all sections of the Vincentian society. That single flight not only  combined a unique mix of some of the most progressive nation builders in our country at the time, but also brought  grief to our regional and international territorial relatives.

Quite possibly the first face that comes to the minds of those of us who were around 34 years ago and now recall that stormy Sunday night, is that of Donna Young. Donna epitomized the youthful beauty, charm, female empowerment and potential of St Vincent and the Grenadines. Donna was a bank worker, employed with Barclay’s bank. She had just turned age twenty and was coming back from a holiday trip to America. Donna had won the Miss SVG and Miss Carival shows right here at home in St Vincent in the year 1984. Donna Young also held the Miss OECS title as well. Her smile lit up the stage like no other. One could not help but love Donna Young. To fully appreciate the connection that the Vincentian public had with Donna Young, think of her as the late Princess Diana of the UK or of President John F. Kennedy (JFK) of the United States of America.. Indeed, Donna was our own Vincentian Princess. She was royal.

Also on that ill-fated flight was a watchmaker who was physically challenged. Imagine a gentleman in his wheel chair and is out and about daily taking orders and repairing watches. That was the fortitude of Robert Fraser, who was born with no legs. Disability was never going to be his inability! Robert Fraser was on the flight, coming back home from a seminar in St Lucia that focused on persons like himself who could not walk or had other physical challenges.

Then there was a family of husband, wife and eight-year-old son who perished that August night. Again, it is expected that everybody’s death will be mourned, but, alas, this was not the average Vincentian family. At just seven years into its political independence from Great Britain, St Vincent and the Grenadines was unfortunate to lose its political opposition leader and two members of his family. Hudson Tannis, along with his wife and son, Ordway,  were returning from a wedding in St Lucia and happened to be aboard  flight 319. Hudson Tannis was also the former Deputy Prime Minister of St Vincent and the Grenadines during the Labour Party government of Milton Cato.

The Grenadines also felt the loss of lives because a native of Bequia, a female passenger listed as Alida Ollivierre, was returning home for her friend’s wedding. She was actually traveling on flight 319 with the bridegroom, Rufus Nelson, a Dominican.

Other passengers on the doomed flight included Busta Lockhart, a Vincentian who was on his way back from cutting cane in Canada. Another Vincentian passenger on board was Ruth Babb. The remaining passengers were two Italians. So, of the  thirteen persons on the plane, eight of them were Vincentians.

The aircraft was being piloted by two pilots, Phillip Roach of Guyana and Keith Hobbins of Jamaica. It has been said that the pilot captaining the flight, although he had been to SVG before, was now doing so as the pilot in command. Apparently, he had an idea where the runway was. Unfortunately, owing to the mountainous terrain of the country, the airport is right next to the Caribbean Sea. Because of the rainfall that night, the place was foggy. Visibility would have been extremely poor. Later, residents of Cane Garden will say that they heard the aircraft circling and then the sound of a sputtering engine. Liat flight 319 aborted the first landing attempt. It was during the second landing attempt that the plane disappeared.

For days and weeks after, all able-bodied man, woman and child, took to the sea and shore to do what they could to find any signs of remains. Apart from a sighting of some floating oil, the remnants of that plane was never to be seen again. At least up to this day. It is said that the waters in the Grenadines are among some of the deepest in the hemisphere, measuring between 180 to 1000 feet. Along with our local coast guard, there were other coast guard ships from Caribbean countries such as Barbados, Trinidad and Tobago, Venezeula, and Barbados.

In addition to all those boat searches, The Trinidad and Tobago government sent a helicopter, and the USA sent an aeroplane to participate in an aerial search and rescue effort.

The following weekend one of the largest and most sombre memorial services was held at the Victoria Park, where everybody who is anybody in St Vincent turned out to sympathize with a grieving nation. Saturday August 9, 1986, and Sunday August 10, were declared official days of mourning and flags were flown at half mast across the country.

Prime Minister of SVG, James Mitchell, at the memorial service for flight 319 passengers at the Victoria Park on Sunday August 10, 1986

This is the last recorded air mishap that LIAT has had which had a direct impact on Vincentians.

I hope that our younger generation will at least take a moment today and pause in reflection of the wealth of human and Vincentian potential that we all lost that night. One cannot help but feel that somehow our lives in St Vincent would have been that much richer as a result of the contributions made by the “unlucky 13” of LIAT flight 319, back on August 3, 1986.

May their souls enjoy eternal bliss.