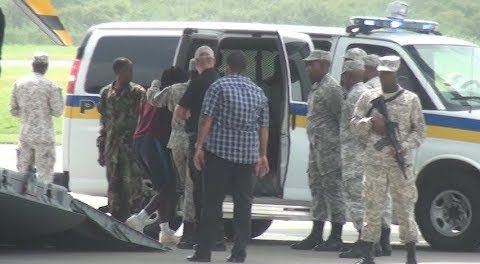 Government sources have confirmed that a second group of prisoners from the British Virgin Islands (BVI) and Turks and Caicos Islands (TCI) arrived in St. Lucia this morning, Tuesday, Sept. 26.

St. Lucia News Online (SNO) was told that 10 prisoners – seven from BVI and three from TCI – arrived at the Hewanorra International Airport in Vieux Fort, sometime after 9 a.m.

Seven prisoners from the BVI arrived around the same time yesterday on a British militry aircraft.

The sources are unable to say if more prisoners are expected.

A prison official in St. Lucia told the media yesterday that the seven high-risk prisoners who were transferred from Her Majesty’s Prison in Tortola, BVI, have been separated from the local prison population at the Bordelais Correctional Facility (BCF).

According to a CMC report, Virginia Lesmond-Joseph, programme manager at the BCF, said the special arrangement was made to facilitate BVI prisoners following public fears.

BVI Governor Augustus Jaspert had noted yesterday that he signed off on the transfer of the prisoners following an agreement between the BVI and the Government of St. Lucia.

A total 143 inmates escaped from Her Majesty’s Prison in the BVI following damage to the facility during the passage of Hurricane Irma on September 6.

Latest reports suggest that most of them have been captured while six are still on the run.