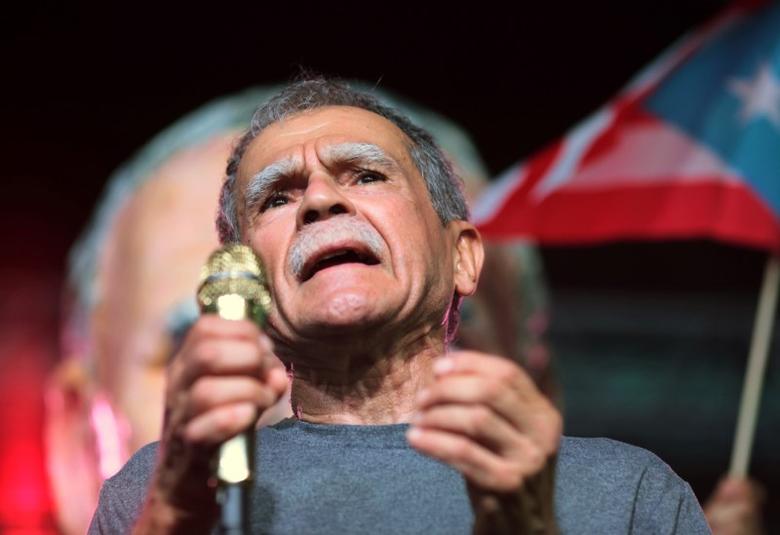 A Puerto Rican nationalist who served decades in prison for his links to militants who carried out more than 100 bombings will march on Sunday in New York’s Puerto Rican Day Parade, but he won’t accept an honor that organizers wanted to bestow on him.

A decision by organizers to present a “National Freedom Hero” award to Oscar Lopez Rivera triggered a firestorm of criticism from politicians and police unions, and led a host of sponsors to pull out of the annual parade up Fifth Avenue.

In the days following the announcement, the New York City Patrolmen’s Benevolent Association, the nation’s largest police union, called for a boycott of the parade, an annual celebration by Americans with roots on the Caribbean island. Organizers expect 1.5 million to watch the Sunday’s event in New York, the same day as the island holds a referendum on statehood for the U.S. territory.

Some of the parade’s major advertisers, including JetBlue Airways Corp and AT&T Inc , pulled their sponsorships over Lopez Rivera’s participation. Some said the conflict over the former FALN leader made them uncomfortable.

With the controversy festering, the 74-year-old Lopez Rivera said earlier this month he would forgo the award.

“I think it’s good that he declined it because it was entirely distracting from the issue at hand, which is Puerto Rico,” said Mayor Bill de Blasio, who planned to march. “That’s the only thing this parade should have been about.”

Behind the scenes, de Blasio’s office pushed Lopez Rivera to say he would not accept the hero’s honor, according to the New York Times, reflecting the political pressure the mayor was under because of his decision to participate.

The mayor’s stance put him out of step with other prominent New York politicians, including Governor Andrew Cuomo, who said he would not march.

In 1981, Lopez Rivera was convicted of sedition and other charges, along with other members of the Armed Forces of National Liberation, known by its Spanish-language acronym as FALN.

U.S. authorities said the group was responsible for dozens of bombings in the 1970s and 1980s in a campaign to secure Puerto Rico’s independence from the United States.

Lopez Rivera, who was sentenced to 55 years in prison, plus 15 additional years for a foiled escape plot, was freed in January during President Barack Obama’s final days in office.

Lopez Rivera’s supporters view him as a symbol of Puerto Rican nationalism and the campaign to end what they see as colonial status.

Puerto Rico, a U.S. territory with 3.5 million residents, was acquired by the United States after the Spanish-American War.

Lopez Rivera had been championed as a political prisoner by “Hamilton” playwright Lin-Manuel Miranda and other celebrities. But critics of the decision to honor Rivera say he is a convicted criminal who helped carry out attacks on U.S. citizens and property, including the deadly 1975 bombing of New York’s Fraunces Tavern.

No one was ever charged in connection with that bombing.

After Lopez Rivera declined the award, City Council Speaker Melissa Mark-Viverito said publicly she would find a way to honor him at the parade.

Currently, a bankrupt Puerto Rico is struggling with $70 billion in debt, a 45 percent poverty rate and critically underfunded healthcare and pension systems. A federal oversight board appointed by U.S. Congress is managing its finances. Against that backdrop, Puerto Ricans on Sunday will cast votes on whether their struggling island should become the 51st U.S. state.

Even if islanders vote in favor of the status referendum, Puerto Rico’s fifth since 1967, statehood would require an act of the U.S. Congress.