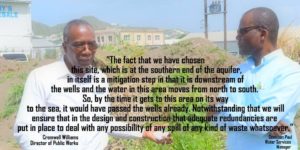 Basseterre, St. Kitts, May 26, 2017 (SKNIS): Cromwell Williams, Director of Public Works, has reassured the public that the site of the new Basseterre High School (BHS), Ponds Estate, has been properly assessed and all checks have been carried out to ensure that the environment remains safe.

On May 25, Mr. Williams, along with the technical team appointed by the government, made his way to the site, which is at the southern end of the Basseterre Aquifer. The director said that “there will be some concerns in the public domain due to the fact that this area is considered an environmentally sensitive area,” but that plans have been put in place to mitigate any fallout.

“The fact that we have chosen this site, which is at the southern end of the aquifer, in itself is a mitigation step in that it is downstream of the wells and the water in this area moves from north to south,” he explained. “So, by the time it gets to this area on its way to the sea, it would have passed the wells already. Notwithstanding that we will ensure that in the design and construction that adequate redundancies are put in place to deal with any possibility of any spill of any kind of waste whatsoever.”

Mr. Williams said that all treatment and disposal of the waste will be done offsite in a remote location “as far as possible from the actual site of the school.”

During the site visit, contractors for the BHS project, Innotech Services Limited, dug test pits to get an idea of the type of soil that is in the area. This will help the contractors in their structural design of the school.

Anthony DaSilva, Chairman of Innotech and George Holder, Project Coordinator for the new BHS were on site.

“We’ve just today presented a conceptual design for the government appointed technical team to review,” said Mr. DaSilva. “We did have a chance to review some of that this morning. It was a very exciting and involved process and we did get quite a lot of feedback from the government today and we expect in the next week to get more of that.”

The Innotech chairman said that it is hoped that the feedback would be put into the evolution of the design leading to the schools construction.

“What’s next is to get through that process in the next couple of months and see how quickly we can potentially get on site and see the new Basseterre High School under construction,” said Mr. DaSilva.

The director of Public Works mentioned that Innotech Services Limited was the company which similarly designed and constructed the temporary BHS facilities at Taylor’s Range. He said that the government therefore decided to invite the company to likewise undertake the design and construction for the permanent Basseterre High School.