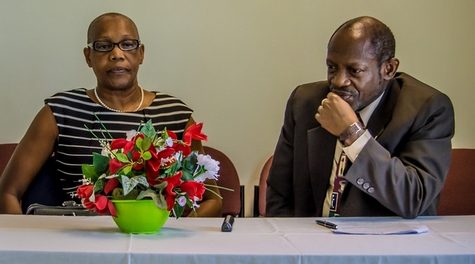 The Opposition Dr. Denzil Douglas led St. Kitts-Nevis Labour Party is coming under fire for what is being described as the party’s deteriorating popularity and relevance within the political landscape.

This advice was highlighted on the popular radio talk show WINN FM’s Voices programme with host Newrish Nital on Tuesday, where the current political landscape of St. Kitts and Nevis was discussed.

WINN FM Reports that several of those who called in criticized the opposition, expressing a range of concerns.

One such concern was the lack of a succession plan in the SKN Labour Party. Despite a lopsided loss in the most recent general elections under the leadership of Ex Prime Minister Dr. Denzil Douglas the party as it stands today seems to find itself stuck with no clear or unclear path to move forward.  Dr. Douglas was rejected as Prime Minster along with his SKN Labour Party. Despite the rejection of his leadership by the populace the SKN Labour Party seems to have found themselves stuck with the now Opposition Leader Douglas as the leader of the party. Dr. Douglas himself in an interview with Caribupdate News stated that his biggest regret as Leader of the Labour Party was his failure to institute , pursue and implement a proper succession plan for the party.

“My biggest regret? Maybe not pursuing vigorously, the transitioning from one leader to the next, at the party level,” Dr. Douglas  told Caribupdate Exclusives

One Caller to the Voices programme in specific reference to the issue of a lack of a succession plan within the Labour Party said “Listen to the opposition, this is what is happening, they have no succession plan that’s the first thing wrong with them. The leader wants to die in office like his predecessors before him and he doesn’t see any one who he can pass the baton to.”

The caller  also accused the opposition of still maintaining the same old strategies and rhetoric that caused it to lose the last elections.

Similar views have been expressed on social media where persons have engaged in discussion highlighting the opposition’s waning relevance and the continued engagement in wild rhetoric and outrageous statements.

Recently conducted Don Anderson Polls suggest that the Team UNITY Government led by Prime Minister Dr. Timothy Harris is  even more popular today than they were two years ago when the tri party coalition was swept into office in one of the most dramatic election campaigns in the history of the Caribbean. Prime Minister Harris enjoys a very high approval rating. The government’s communications operations as well as it’s level of transparency and implementation of manifesto promises have all come in for high approval or favourability ratings according to the Don Anderson Poll .

Labour Party Chairperson Hon. Marcella Liburd told WINN FM that her party is in the process of looking at their operations and activities with a view of reforming and rejuvenating the party.

WINN FM reported that MP Liburd says the tactics, the methods and plans of the Labour party are currently the subject of proper consultation within the party.

“We are working on it right now, everything is timing. So, we are constantly revising and looking at the way forward, a different direction, but we are not ready to release it yet. So, we in the present constantly come together and look at these things, invite people and speak to experts. So, we are going to have brand new plans going forward it’s just that everything is timing.”

While the Labour Party is considering their plans and efforts to reform and rejuvenate the party the Team UNITY Government have been extremely busy pursuing their plans as outlined as part of their Prosperity Agenda. St.Kitts-Nevis’ tremendous economic performance since the Team UNITY Administration took office,  has seen major private companies recording unprecedented sales and profit figures. Social Security has recorded it’s highest ever Job figures with an unprecedented 24, 600 plus persons gainfully employed in the federation. The amount is the highest ever on record. The country’s GDP ratio is currently at the highest it has ever been. The Tourism industry has seen an unprecedented 3 year span with an average of close to 1 million visitors per season.