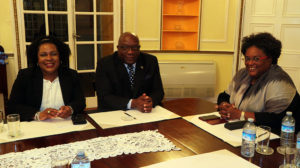 The meeting between Prime Ministers Harris and Mottley was held at the official residence of the Prime Minister of Barbados located at Two Mile Hill, St. Michael. Also present during Wednesday’s discussions was Minister of Information, Broadcasting and Public Affairs, Senator the Honourable Lucille Moe.

The two Caribbean leaders addressed a number of issues of regional significance including the payment of monies owed to the University of the West Indies (UWI), as well as the issue of blacklisting of small island states.

During the productive and cordial conversation, Prime Minister Harris outlined his plans to ensure regional governments settle their outstanding payments to the University of the West Indies and effectively bring the internationally recognized institution’s arrears down to satisfactory levels.

Earlier this year at the 29th Inter-sessional Meeting of the Conference of Heads of Government of CARICOM held in Haiti, Prime Minister Harris, CARICOM’s lead Head for Human Resource Development, was tasked with leading these settlement efforts.

Dr. Harris was among 70 outstanding UWI alumni who were honoured by the University on Wednesday (October 10) for excelling in their respective fields. The St. Kitts and Nevis Prime Minister, as well as Senior Minister Vance Amory, was recognized by UWI in the areas of Leadership and Public Service.

On the issue of blacklisting, Dr. Harris reiterated his position that the unfair and discriminatory blacklisting of developing countries poses significant challenges to the economies of those countries—an issue the Prime Minister also raised during his presentation at the recent United Nations General Assembly in late September.

Prime Minister Harris told the august body then that small island states are “forced to divert scarce resources to address the onerous and arbitrary demands of the EU Code of Conduct Group and other entities created by large highly developed countries” and noted that it is “absolutely unfair to subject some counties to evaluation and ever fluctuating standards while others are exempt.” 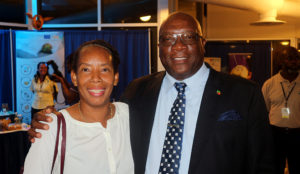 Following the bilateral meeting, Prime Minister Harris was invited by Prime Minister Mottley to attend the opening ceremony for the 15th Caribbean Week of Agriculture event being held at the Lloyd Erskine Sandiford Centre from October 8-12 under the theme, “Strengthening Agriculture for a Healthier Future in the Region.”

The Caribbean Week of Agriculture provides a forum for Ministers of Agriculture, planners, regional organisations and other key agricultural stakeholders in the public and private sectors to meet to discuss major issues affecting the agricultural sector in the region.