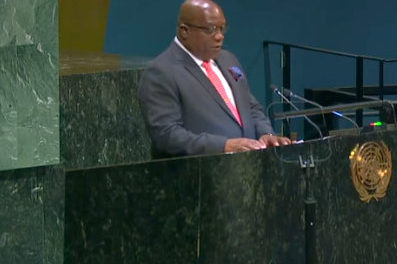 Tweet
BASSETERRE, St. Kitts, September 28, 2018 (Press Unit in the Office of the Prime Minister) – “The international community cannot on the one hand claim to help SIDS while in the same vein classify us as middle and high-income countries based on archaic financial models that ultimately deny access to critical developmental assistance and hinder investment financing.”

That is the view of St. Kitts and Nevis’ Prime Minister, Dr. the Honourable Timothy Harris, who demonstrated strong leadership while advocating on behalf of small island developing states (SIDS) on matters of critical importance, including countries abilities to access much needed international funding.

Addressing today’s (Friday, September 28) General Debate at the 73rd Session of the UN General Assembly, Dr. Harris reiterated calls for the international community to address with urgency the sterile measure of the per capita income criterion now employed to determine the graduation of countries.
Furthermore, Prime Minister Harris told the UN General Body that the developmental efforts of small states, like St. Kitts and Nevis, are being thwarted by an unfair financial architecture with the threat of de-risking and loss of correspondent banking relationships.

“This is compounded by the very discriminatory and irrational blacklisting of countries that are forced to divert scarce resources to address the onerous and arbitrary demands of the EU Code of Conduct Group and other entities created by large highly developed countries,” said Prime Minister Harris, adding, “It is absolutely unfair to subject some counties to evaluation and ever fluctuating standards while others are exempt.”

Dr. Harris, who is the Minister of Finance in the Government of St. Kitts and Nevis, noted that at great cost small states are attempting to rise to the challenges posed by the unfair international financial architecture, “However, the frequency and arbitrariness of these unilateral demands derail essential development efforts in small states.”

In a passionate plea to his global colleagues, the St. Kitts and Nevis Prime Minister insisted that SIDS deserve and have a right to expect fairness, transparency and consistency of treatment of all states.

“I therefore call on this Body to bring the plight of small states like St. Kitts and Nevis to the forefront of the international discourse and to bring an end to such discriminatory practice,” Dr. the Honourable Timothy Harris said.
Tweet