Prime Minister of Grenada Dr. Kieth Mitchell  will be this year’s Special Guest Speaker for the 52nd National Convention of the People’s Action Movement. Mithcell  will be following in a long line of esteemed and noted speakers the party has hosted over the years. Some of the more notable Guest presenters over the years include Leader of the Opposition in Barbados Ms Mia Motley, Former Prime Minister of St. Lucia Mr. Stephenson King, Former Prime Minister of Jamaica Andrew Hollness and former Trinidad and Tobago MP Ashworth Jack among others.

Dr. Mitchell entered the Political Arena In 1984 when he was elected Member of Parliament for St. George North West, and has held the seat in each subsequent election. Dr. Mitchell was elected Political Leader of the New National Party (NNP) in 1989 defeating Prime Minister Herbert Blaize. He served as Minister of Communications, Works and Public Utilities, Cooperatives, Community Development, Women’s Affairs and Civil Aviation from 1988 to 1989 in the New National Party (NNP) Government.

On June 20 1995, Dr. Mitchell successfully led the party to victory in the 1995 general elections winning eight out of fifteen seats in the House of Representatives; Dr. Mitchell took office as Prime Minister, along with his Cabinet, on June 22, 1995.

In the 1999 election, Dr. Mitchell led the New National Party to an unprecedented victory, winning all 15 constituencies and being the first Prime Minister since Independence to win two consecutive general elections. His portfolio included Minister of National Security, Finance, Trade, Industry, Planning and Information and later on National Security and Information.

Dr. Mitchell led the Party to another unprecedented but narrowly won election on November 27, 2003, when the Party was elected to a third consecutive term in Office. He held the portfolios of National Security, Human Resource Development, Information, Information Communication Technology (ICT), Business and Private Sector Development and Youth Development. Her Majesty the Queen appointed him to the Privy Council on February 20, 2004.

The New National Party was defeated in the general election held on July 8, 2008 by the National Democratic Congress (NDC), winning only four seats against 11 for the NDC. Dr. Mitchell himself was re-elected to his seat for St. George North West and continued as NNP leader. He was sworn in as Leader of the Opposition on July 16, 2008.

On February 19thth, 2013, Dr. Mitchell and his New National Party defeated the incumbent Tillman Thomas and the National Democratic Congress, winning all 15 Seats- the second time he and his party achieved such a historic feat.

On February 20th, 2013, Dr. The Right Honourable Keith Mitchell was sworn in as Prime Minister, for the fourth time. 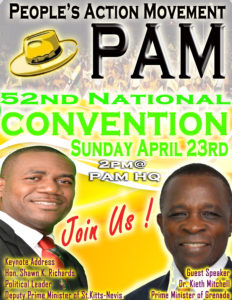 The convention has for the last 52 years been the highlight event for the party’s faithful. It has also been a time of reflection and inspiration as members recall when in 1965 the four original PAM stalwarts (Billy Herbert, Rt. Hon Dr. Sir Kennedy Simmonds, Michael Powell, and Richard Caines) decided that for the love of country they would sacrifice their lives and challenge the Labour Administration of Robert Bradshaw.  Other pioneers included Colin Pereira, Cecil “Moonlight” Roberts, Joseph Sutton, Victor Maynard, Richard Shelford, Shefton Warner, and Courtney Dickenson.