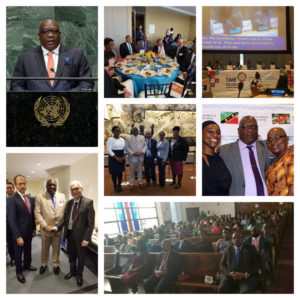 BASSETERRE, St. Kitts, October 1, 2018 (Press Unit in the Office of the Prime Minister) – Addressing the United Nations General Assembly, co-chairing a multi-stakeholder panel of the Third high-level Meeting of the General Assembly on the Prevention and Control of Non-communicable Diseases (NCDs) and speaking at a World Health Organization (WHO) forum, which also addressed the global threat of NCDs were among the many engagements on Prime Minister Dr. the Honourable Timothy Harris’ busy schedule during his trip to the United States from September 25 to October 1.

The overarching purpose of Prime Minister Harris’ trip was to attend and participate in the 73rd Session of the United Nations General Assembly held at the UN Headquarters in New York. The St. Kitts and Nevis Prime Minister addressed the august body on Friday, September 28, at which point he drew the international community’s attention to several matters of importance including the current international financial architecture, climate change, the threat of NCDs to small island developing states, and global peace and safety.

“We need to see all Global Leaders come together to create and maintain stability, equality and peace in our countries, so that our collective contributions can prevent and avoid war and violence; end the proliferation of nuclear weapons, reduce greenhouse gas emissions, and create a level playing field for small states to thrive,” Dr. Harris said during his presentation on Friday.

The Honourable Prime Minister continued, “It is our shared responsibility to create the best opportunities and fulfill the expectations of our current and future generations. I am convinced, Mr. President, that if we continue to work steadfastly, always vigilant and focused on the overarching goals, we shall contribute to be a more relevant, fair, productive and meaningful United Nations, and by extension, a better world for all our peoples.”

Prime Minister Harris also attended a number of events held on the margins of the UN General Assembly, including a high-level breakfast forum on Thursday (September 27) with his fellow CARICOM Heads and regional health officials. Held under the chairmanship of Dr. Harris, the meeting saw the regional leaders recommitting their efforts to addressing the issue of NCDs in the region with the launch of the Caribbean Moves campaign, which seeks to raise awareness to non-communicable diseases (NCDs) and ways to combat the diseases.

That same day, the St. Kitts and Nevis Prime Minister and President of the Republic of Zambia, His Excellency, Mr. Edgar Lungu, co-chaired the first Multi-stakeholder panel of the Third high-level Meeting of the General Assembly on the Prevention and Control of NCDs. This high-level meeting brought together world leaders, as well as global figures, who contribute their time and resources to combat the challenges of NCDs, including philanthropist Mr. Michael Bloomberg, who is now the World Health Organization’s (WHO) Global Ambassador for Non-communicable Diseases and Injuries.

In his capacity as CARICOM’s lead spokesperson on HIV matters, Dr. Harris noted that investing in the NCDs Agenda not only improves health and saves lives but will also improve a country’s economic productivity, adding, “It will improve workforce participation and productivity and limit the financial burden of unexpected financial costs from NCDs on the pockets of our citizens.”

While in New York, Prime Minister Harris was sure to dedicate a portion of his time to interact with nationals of St. Kitts and Nevis living in the diaspora.