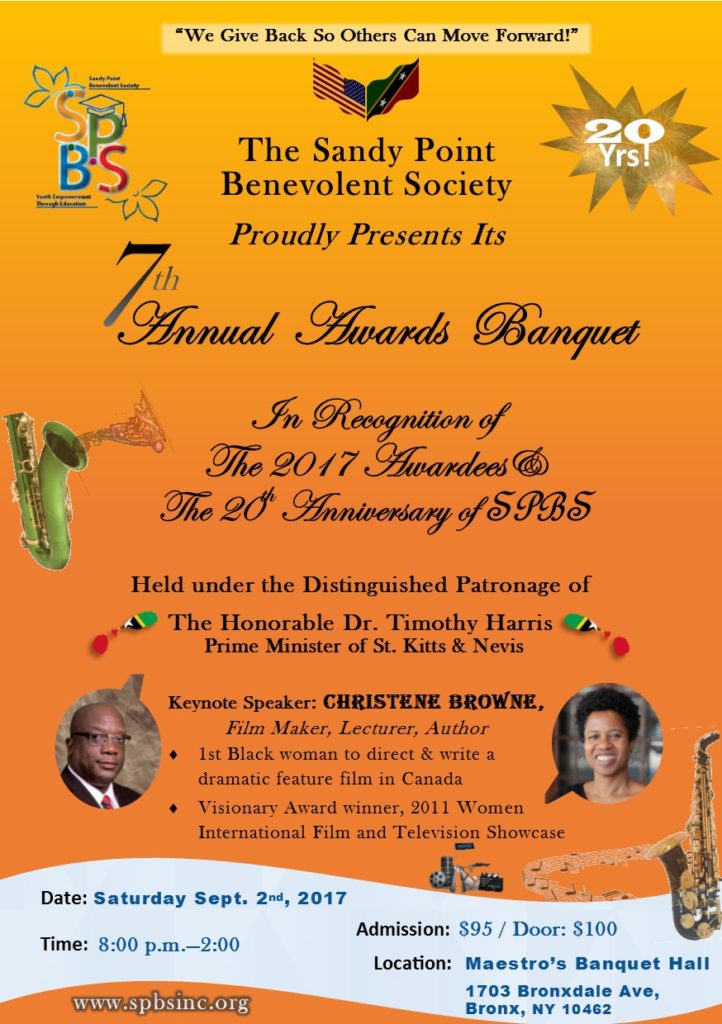 Following a very successful Awards Banquet at the Marriott Hotel in St. Kitts in December 2016, the Sandy Point Benevolent Society (S.P.B.S) is moving quickly to prepare for yet another exciting and well executed Banquet on Saturday, 2nd September, 2017 at Maestro’s in the Bronx.

Announcing that the current Prime Minister of St. Kitts & Nevis is the patron of this year’s banquet, President of the S.P.B.S, stated with pride, “we believe we can capture the support of our patrons with the dynamic presence of the Prime Minister of St. Kitts and Nevis. This obviously will positively impact our goal, which is to continue to fund academic scholarships to students of the CEMSS.”

Dr. Timothy Sylvester Harris is not only Prime Minister but also the current Minister of National Security, Finance, Sustainable Development, People Empowerment and Constituency Empowerment. He previously served as the Minister of Foreign Affairs from 10th August, 2001 to 25th January, 2013. Prime Minister Harris grew up in the rural village of Tabernacle and attended the Cayon High School and Basseterre High School before making his journey to further his education to six university campuses- two in the Caribbean and four in Canada.

Prime Minister Harris is an accomplished academic. In 1988, he graduated from the Cave Hill Campus of the University of the West Indies with a B.Sc. degree with First Class Honours in Accounting being the only graduate of the B.Sc. Accounting programme to obtain this distinction.  He also received the Victor Crooke Prize for Best Accounting Student. From 1990- 1992, he pursued his M.Sc. degree in Accounting at the St. Augustine Campus of UWI in Trinidad and again excelled. He graduated at the top of the class with a M.Sc. degree with a Distinction in Accounting. Subsequently he pursued doctoral studies and he now holds a Doctor of Philosophy degree in Administration, majoring in Accounting from Concordia University in Montreal (a joint program with McGill University and UQAM).

Before entering into the political sphere, Minister Harris would have worked within the private sector of the nation. He was employed within the manufacturing sector and upon his returned to St. Kitts from pursuing his undergraduate degree, he worked for two years at a managerial level with S. L. Horsford and Company Ltd.

Then, in 1993, Mr. Harris commenced his political career which has turned out to be a very storied one. He participated in elective politics in 1993. In the elections of 1995, 2000, 2004, and 2010, he has won his seat overwhelmingly as the St. Kitts-Nevis Labour Party Candidate for Constituency 7 – Belle Vue to Ottleys.  After his relationship with the St. Kitts & Nevis Labour Party was fractured, Dr. Harris contested the 2015 General Elections as the People’s Labour Party’s Leader and Candidate for Constituency 7.

Besides his prolific political journey, Dr. Harris has received several awards. Among the many accolades bestowed upon him are the awards from the St. Kitts Youth Council Award for Excellence in Education, the FESTAB Community Award for outstanding contribution to FESTAB and a certificate for outstanding contribution to the Cayon High School. It was in Manila, Philippines, in November 2016 that Prime Minister Harris received the Gusi Peace Award. Further, he was acclaimed the St. Kitts Nevis Observer Newspaper 2016 Person of the Year.

SPBS is proud to have the leader of the Federation of St. Kitts and Nevis, Prime Minister Dr. Timothy Harris serve as Patron of our 7th Annual Banquet, to be held at the Maestros Banquet Hall on 2nd September, 2017.